What will France do next? 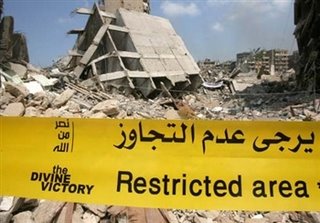 As the post mortem continues about the latest war in Lebanon – and will continue until the next one starts, as Hezbollah has flatly refused to abide by the agreement so lovingly crafted by SecGen Kofi Annan (father of Kojo) – various interesting details emerge.

To start with, Lebanese politicians are getting worried, as well they might be. The country, if it can be called that, is now at the mercy of Hezbollah and its Syrian and Iranian sponsors. There is some evidence that the politicians and military commanders, having done nothing to disarm Hezbollah and prevent the importation of arms into Lebanon or about the creation of that state within a state, were thinking that perhaps Israel will solve the problem for them. Naturally, they would sit on the sidelines and cry foul every time the IDF bombed so-called civilian targets. The future looks considerably more bleak for them than for Israel.

Meanwhile the Beirut international airport has opened to commercial flights. Amid all the cheering there seems to be no mention of the fact that if it could be opened that easily it was presumably not bombed by those nasty Israelis, despite their well-known propensity to bomb everything indiscriminately.

The Lebanese army, having proved to be completely useless in the many months since Syria’s part-retreat from the country and having more or less sat the recent conflict out, is slowly taking up positions in southern Lebanon to prevent further attacks on and by Israel. Since they have already announced that they neither can nor will disarm Hezbollah, their achievements in this field are awaited with bated breath.

Another part of the whole arrangement that is awaited with bated breath is the appearance of the international force, for which there have been precious few volunteers. Past history of UN forces in the Middle East does not fill one with any great hope for a peaceful arrangement.

Who is to lead the contingent? The general assumption seems to be that it will be France and the BBC is terribly excited in a muddled sort of way about the prospect.

“Many see the French as natural mediators because of the strong historical ties between the two countries.

France's role in helping to negotiate the UN resolution allowed it to continue mending its relations with the US after the past divisions over Iraq.”

Those strong historical ties are not precisely that of equal partners, France having been the imperial ruler of Lebanon for a couple of decades until the Germans occupation of the former. Would the BBC advocate British meddling in Egyptian or Sudanese affairs because of the “strong historical ties”? I think not.

It is, of course, quite sensible for France to mend its relations with the US but the tortuous negotiations over the UN resolution that became a laughing-stock before the proverbial ink dried on it may not necessarily achieve this.

The same story points out that both President Chirac’s and Prime Minister de Villepin’s approval rating went up by 5 per cent but noticeably does not say what the figure had been before.

Still, even the BBC has to admit that the problems for France are only beginning. Exactly, what is it going to do in southern Lebanon? How many troops can it spare and who else is going in with them? They are already bogged down in Côte d’Ivoire and taking on Hezbollah will be a far harder test.

Public opinion in that country seems as incapable of thinking things through as it is in Britain, which is a comfort to those of us who have been somewhat depressed by the latest YouGov poll.

Seven out of ten, responding to a poll by the newspaper La Croix, are in favour of an international force and 53 per cent are in favour of sending French troops, because it is for peace, though it might bring terrorist attacks to France. (If it is only carbeques in the banlieux that does not count.)

The politicians, however, are worried.

"France wants the mission's rules of engagement to be clear and it to have real means," she told French TV.

"Sadly, all too often, the United Nations forces don't have the power that they asked for."

Jacques Myard, an MP in France's governing UMP party and a member of the parliamentary foreign affairs committee, told the BBC the last UN resolution
did not make it clear how France can act.

"I know that a lot of military, high-ranking officials in France are reluctant if this mandate is not very precise," he said.

The opposition socialists have also warned that "extreme vigilance" is needed, saying the UN resolution does nothing to address the conditions necessary for a political agreement that would guarantee the security of peacekeeping forces.

Above all, France wants to avoid a situation where its own soldiers find themselves having to disarm Hezbollah fighters.”

As it happens, Philippe Douze-Blasty has already announced that France has no intention of disarming Hezbollah, preferring to use “diplomatic methods”, whatever they might be in the circumstances. This, too, is known as speaking loudly but carrying a very small stick.

Still, there might be a solution to this problem: Turkey.

“Foreign Minister Abdullah Gul, in Beirut yesterday for talks, reportedly received the message that "all sides are waiting for the friendly Turkish soldiers" to take part in the United Nations sponsored peace-keeping force in southern Lebanon. FM Gul noted that the final decision from Ankara would come following his upcoming Sunday visit to Israel.”

Let us not forget that Turkey, in her previous incarnation as the Ottoman Empire, also has strong historical links with all the countries in the region.