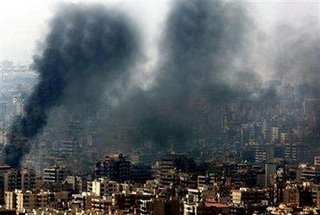 There was a time when the Sunday newspapers devoted the bulk of their space to analysis of the previous week's events, adding detail and reflection that the dailies, slaves to the demands of immediacy, cannot offer.

And, when it comes to the week's news agenda, there can be no doubt that the most powerful and dramatic event was the incident at Qana. Furthermore, there is every reason to believe that Hezbolla intended to maximise the impact of the casualties for one very good reason. It had seen the IDF forces lining up on the border and – unlike the hacks – would have had a very clear idea that, at the very least, a deep raid was being planned.

That Israel was intending more than a series of clashes immediately inside the Lebanese border was clearly evident as early as last Saturday. We certainly predicted this then, simply from an analysis of the equipment being deployed – especially the large numbers of Pumas which the IDF describe as Poretz Mokshim Handasati (minefield breakthrough vehicles).

Despite the wailing propaganda from the "liberal" (not) press, which wishes to convey the message that military action is useless and that Israel's military efforts are failing, the IDF has been giving out consistently bullish messages to the effect that it is seriously damaging Hezbolla. I am sure that is right. The indications are that Hezbolla over-reached itself. It did not expect such a robust or prolonged response and was (and still is) anxious for a cease fire. The need became doubly urgent when it saw the nature of the military forces lined up against it, having been at the receiving end of its awesome capabilities.

This, of course, is speculation but nonetheless informed speculation – precisely what one used to expect from the quality Sunday papers. It also puts the Hezbolla response to the Qana incident in context. Arguably, it engineering a massive PR campaign on the site, specifically with a view to turning opinion in the United States against the Israeli military action and forcing an early cease-fire.

If that is actually what did happen, then it is a matter of some significance that the IDF is still deployed and fighting. One could say on that basis – despite the help, willing and unwitting - from its allies in the Western media, that the ploy failed. The current developments in seeking to arrange a cease fire through the United Nations are looking like they are going nowhere in a hurry, and a timetable still looks highly tentative.

However, you do not have to agree with this analysis to accept that the issues would be a valid and highly relevant topic for discussion. Furthermore, given the enormous controversy raging about the Qana incident, one might confidently expect considerable discussion about it – both broad and narrow – in today's papers.

It comes as no real surprise, though, to find that the newspapers are almost completely devoid of any discussion of Qana or its (nearly) strategic implications. But the surprise is absent only because this blog has been part of the controversy, taking nearly half a million hits since the news broke.

From this comes the realisation that, in the UK at least, the controversy has been confined to the internet – the blogs and the forums – confirmed by the fact that, if you google "green helmet" and "Qana", you will find some 36,600 links – with no reference to any of the major British media sources. In other words, the MSM is totally out of the loop. In terms of the "big issue", it is not even in the game and the debate is going on without it.

This cannot be unrelated to the fact that the MSM is running its own agenda and, as we experienced this week from a number of responses to our posts, including this and this, it seems to believe it is perfectly acceptable to lie in order to pursue it. And, as Little Green Footballs and American Thinker point out, it is continuing to do so – the former illustrated by the Reuters' picture above, which shows evidence of having been doctored.

That, more than anything, has created a world of two medias, the MSM and the blogosphere. Each occupies parallel universes with very little connection. But, inasmuch as the blogosphere ran the agenda this week, and the MSM failed to achieve its, there are some indications that the tipping point has been reached. It could well be that, when the histories are written, Qana will be seen as the incident which shifted the balance of power from the dead tree sellers to the keyboard addicts - the week when the bloggers and the internet community held the line.

Maybe such thoughts are premature – but maybe not. If they are - and in any event - the writing is on the wall and it is not surprising the MSM are rattled. Parallel universes there may be, but this town ain't big enough for both of them.