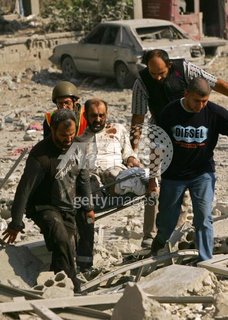 After much labour, Part 6 of our report, "The Corruption of the Media" is now finished. Each part more or less stands on its own, and this one contains considerable new material.

Amongst the gems we found was this (left), a photograph from Nicolas Asfouri (AFP/Getty Images) from Khurabah/Qana, showing the eponymous "Green Helmet Guy" helping a stretcher party negotiate some wreckage.

But, as always with the pictures coming out of this incident, nothing is what it seems. Asfouri's caption reads: 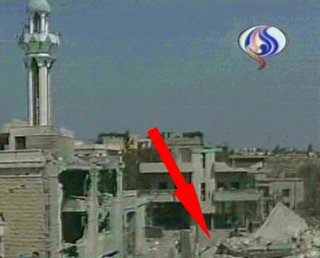 However, our analysis shows that the scene is at the bottom and the right of the road we call "Stretcher Alley". The stretcher party is some 400 yards from the wrecked house, at the point marked by the red arrow.

Furthermore, they have come from around the corner to the left, from just beyond the mosque in the picture. If, like all the rest coming from the wrecked house, they had followed the road round (see below left), they would have found the going easy. But, under the guidance of "Green Helmet", they have swung wide onto a field of debris left from a previously bombed house, to make the shot look more dramatic. 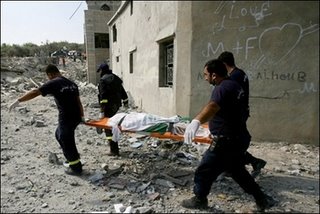 Once again, "Green Helmet" is faking it. And that is a fact that must have been obvious to AFP's Nicolas Asfouri who not only went along with it but wrote up a false caption to cover his tracks.

Can I just remind you of what Kathleen Carroll, AP's senior vice president and executive editor, said on behalf of her agency, AFP and Reuters? It went something like, "Photographers are experienced in recognizing when someone is trying to stage something for their benefit". Patrick Baz, Mideast photo director for AFP, however, was "totally stunned" at the idea that any of his photographers might be taking shots of staged scenes.