Your bluff has been called 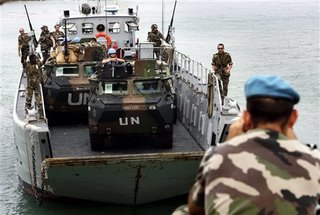 It always used to be said that those who can, do – and those who can’t, teach. Updating that pithy little saying, it seems now that people who can’t simply join the EU diplomatic corps (unless they’re already employed by the UN) and talk about other people doing things.

And no, just for once, I'm not talking about Lebanon – not yet at any rate – but Sudan. Believe it or not, we last wrote about this troubled region last April, a weary cry that predicted that nothing much would improve after the then attempt at brokering a cease fire.

Sure enough, nothing much has changed with the killing still going on and the EU bleating about the warring parties in Darfur needing to “respect” the latest, two-month old peace deal for the region.

It's funny how they always use that word "respect" when they surely mean "obey", but that word is too hard-edged for EU foreign policy chief Javier Solana. After all, if he did utter such a word, it might imply an "…or else", to which the answer might well be, "you and whose army"?

Any such defiance might be easily bolstered by the sight of the photograph we have published above, showing the latest French Army reinforcements storming into Lebanon to enforce the cease fire – all 49 of them.

Alright, that means that there are another 151 to follow – a prospect that, far from striking terror into the hearts of Hezbolla or any wannabe terrorist group can only invite mirth.

Yet, when I wrote about Darfur last, I suggested that:

…the greatest humanitarian need in this part of Africa is a body of disciplined men with guns and orders to shoot to kill … However, as long as the US is effectively neutralised by the Middle East, and by "world" opinion which would only condemn American intervention, the only credible force available must come from Europe.

And indeed, unreported it is, not least by this blog which, like so many others, has been obsessed with affairs in the Middle East.

That, perhaps, is the hidden cost of the recent and still unresolved Lebanon issue but the longer-term cost might be even greater. For all the world to see – and mock – on display is the hollowness of European military aspirations, naked in tooth and claw. When the chips are down, a Continent that once fielded armies of millions can only manage a rusty landing craft, a brace of armoured personnel carriers and 49 men.

Weep now Javier Solana – it ain't going to get any better. Your bluff has been called.