The horrors of war 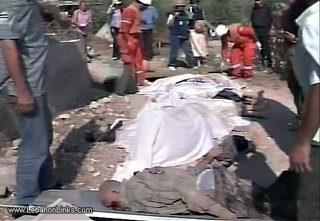 Yesterday, I had an amiable chat with Patrick Barkham of The Guardian, the results of which may appear in the Monday edition.

Amongst the things discussed was the underlying reasons why hacks seem incapable these days of reporting accurately on issues like the war in south Lebanon, a subject to which I have given a great deal of thought.

At the root of the most egregious failures, I believe, are three fundamental flaws – all to do with the basic mindset of the journalists involved. The first, it seems to me, stems from the way history has been taught in schools for some decades, where the focus on past wars is presented in terms of the horrors and suffering, with very little factual information as to why and how they were fought.

To a very great extent, therefore, children finish their education imbued with the idea that "war is bad" – violence is bad, without in any way understanding the historical contexts in which wars have been fought, or realising that, bad though it most certainly is, there are worse things than war.

Secondly, within modern journalism, there is a current vogue to couch "stories" in terms of "human interest", which means that nothing is news until a human face can be found on which to base any account. A simple, factual account of events is not longer acceptable – there must always be a human dimension.

While this was always the case, to an extent, the balance has now tilted so far that "human interest" now dominates the news, so much so that factual content has virtually disappeared.

Thirdly, now coming through the system, we have a generation of journalists who have never seen military service and have thus no experience, from the sharp end, of warfare, nor of military affairs from the inside. This tends to be combined with an anti-militaristic viewpoint, carried over from their education, which means that your average hack is usually ignorant about the conduct of warfare.

This is the sort of person that can just about – with a little schooling – tell the difference between an armoured personnel carrier and a tank (although they often have trouble distinguishing either for an MICV) and such is their level of ignorance that they are rarely able interpret what they see, or provide intelligent comment.

And, being unable to understand what is going on, they prefer to stick with what they know - burbling about the "horrors of war". And, in the current operations in southern Lebanon, where it is in Hezbolla's interests to emphasise precisely that point, they find in the western media, people who are admirably conditioned to serve them.

By some cruel irony, in today's Daily Hezbolagraph, we have a superb example of the genre, with Tim Butcher filing a stunningly ill-informed piece about operations on the Lebanese border.

Since military issues have been in the news of late (although overshadowed by other events) – not least Afghanistan and the "overstretch" suffered by British forces – I intend later today (early evening, British time) to publish a post explaining why Butcher's story is so wide of the mark, together with an analysis of the current Israeli military operation, and its implications for both US and British forces in the war against terror.