Well, that just goes to show 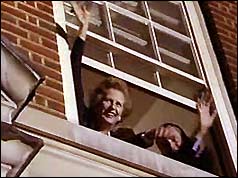 I note with some admiration that my colleague has apologized for what he calls light blogging over the week-end as he was busy wrapping up the Green Helmet saga. I don’t have the same excuse for light blogging though I did manage to see two excellent World War II films by Sir Carol Reed “Night Train to Munich” and “The Young Mr Pitt” about which I shall be blogging somewhere. Then again, a large number of our readers or, at least, members of the forum, tell us quite frankly that they do not read what I write, have not noticed that there are two writers on this blog and do not care to find that out. All I can say to them: skip this posting.

What caught my eye this morning was a rather curious piece in the Daily Telegraph about who might have been the greatest twentieth century British Prime Minister. As Margaret Thatcher, whom I admire enormously, won I was going to nod and pass on. Then I noticed that Clement Attlee, author of the modern British welfare state, which is still causing endless problems to this country, came second and Edward Heath, possibly the most unsuccessful (well, give or take Anthony Eden) of our most recent Prime Ministers, third with Winston Churchill fourth and the unfortunate Neville Chamberlain last.

At that point I started paying attention. It is, of course, impossible to set up a real league table of premiers, as circumstances are so different for each.

Influenced by Robert Donat and by William Hague’s excellent biography of Pitt the Younger, I would probably place him at the top of my complete list, as one who was successful in peace and war (though, clearly, not all the time in the latter). But back to the twentieth century that does not boast personalities like either of the Pitts.

The list was put together by Francis Beckett, a veteran left-wing journalist and a long-time contributor to The Tribune. In the circumstances I am not as surprised as Graeme Wilson, the Telegraph’s Political Correspondent, about him putting Tony Blair so low. I am surprised that he put him so high.

Mr Beckett is also an historian and biographer, mostly on left-wing themes, though there is a biography of Harold Macmillan due out soon (I suppose that, too, could be counted as left-wing) and, mysteriously, of Laurence Olivier. Mr Beckett has written short stories and plays of what looks like agit-prop persuasion, so, I suppose, he might be interested in one of our greatest modern actors.

There is a book due out, edited by Francis Beckett on 20 British twentieth century prime ministers and, presumably, this table is a precursor or, perhaps, a bit of free advertising. All in all, it gives an interesting insight into the thinking of a left-wing historian and journalist.

Margaret Thatcher was awarded full marks (five out of five) for “taking one kind of society” and turning it into another. Attlee, it seems, was awarded full marks for much the same thing. The fact that Thatcher’s great achievement was to dismantle a good deal of Attlee’s edifice and the tragedy of this country being that she did not have time to complete the Herculean task, does not seem to alter Mr Beckett’s view. He is, after all, a left-wing historian and for the likes of him criticizing Attlee’s government would come close to blasphemy.

His argument for not placing Churchill above fourth is not irrational. A great war leader, which makes him one of the greatest men in this country’s history, he was largely an unsuccessful peace-time politician and Prime Minister. Mr Beckett also points out that Churchill lost the 1945 election, which takes away some of the achievement.

Well, Attlee lost the 1951 election and Heath lost three of the four he fought. What makes Heath the third greatest twentieth century Prime Minister in this country? Was it the climb-down to the unions or the winter of discontent? Was it the three-day week or the destruction of local democracy? Was it the creation of the large police forces, the beginning of the process which has brought us to the sorry state of policing that we suffer from now?

It might be any or all of the above but what really endears Heath to Francis Beckett and the BBC History Magazine is the taking of Britain into the European Union as Mr Wilson puts it in the Telegraph. Possibly, Mr Wilson does not know that Heath took this country into the Common Market, having assured all and sundry that a political union was not and never had been on the cards. Possibly, Mr Beckett also holds that view. One does rather wonder why he should have such a low opinion of Tony Blair and his economical attitude to the truth and yet think so highly of Edward Heath.

Then again, why put Neville Chamberlain, who was really quite successful in domestic politics with many good ideas that came to fruition and many more better ones that would have created a much more successful welfare system than the one that came out of Attlee’s government, at the bottom? The Munich Agreement, of course, with Mr Beckett (or possibly Mr Wilson of the Telegraph) unaware of the many historical debates that have raged around that event, and the fact that he did not manage to avoid war.

True enough but then the purpose of the Munich Agreement was to do just that. Would not signing it have avoided war? And why is Edward Heath desperately going along with everything presented to him by the EEC negotiators, regardless of the benefits or disbenefits to this country, to be praised for his supposed achievements?