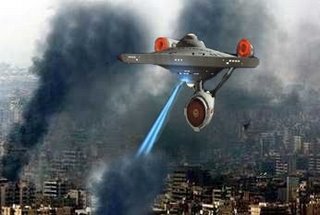 EU Referendum has learnt within the last hour that the doctoring of the Reuters' photographs was authorised at the highest level in the agency, all to conceal a greater and stunning intervention by Federation forces. For the first time, we reveal exclusive photographic evidence of what was really going on in Beirut that fateful day. However, sources say that Reuters' chiefs are totally unconcerned by the new revelations as, after the Reutersgate scandal, no one believes Reuters photographs any more. 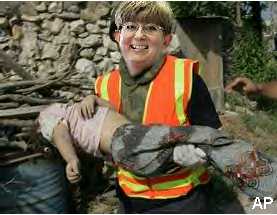 Meanwhile, we have also learnt that, after reading her own organisation's statement of news values, Kathleen Carroll, senior vice president and executive editor for Associated Press, had decided to carry out her own personal investigation into the media conduct at Qana on 30 July. Again, we have acquired an exclusive photograph from the Reuters news agency, showing Mz Carroll re-staging events at the scene.

And finally, we have learnt that the Daily Hezbollagraph's web news editor, Shane Richmond, is to apologise for making such a fool of himself on his clog.

Nah… we made that last one up.