Another great idea from the Finnish Presidency 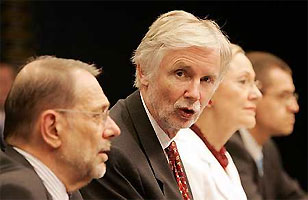 There are so many problems with the notion of an EU common foreign policy, one doesn’t always know where to start. But one obvious reason why it can never work is that nobody knows precisely who speaks for the EU on matters of foreign policy (never mind what that person might be saying). Is it the egregious Javier Solana, the High Panjandrum or the CFSP? Is it the relevant Commissioner, at present the Austrian Benita Ferraro-Waldner? Is it the various foreign minister, together or separately? Or is it, as Judy Dempsey puts it in her article in today’s International Herald Tribune, the European Presidency, at present held by Finland and, specifically, the Finnish Foreign Minister, Erkki Tuomija?

Well, he thinks he is the one to pronounce. Unabashed by the EU’s failure to come to any conclusion as to what its policy might be and by the clear lack of any influence the organization and its members might have in the Middle East, he

“said the EU was respected in the region for its "soft power" approach to the Middle East conflict, in other words using diplomatic, humanitarian and economic means instead of U.S.-style military might”.

Even Ms Dempsey seemed a little sceptical about this.

“Asked what the EU could achieve in concrete terms as the United States and France wrangle over the terms of a cease-fire in Lebanon, where more than 1,000 people have died over the last month of war, Tuomioja said that the 25-member bloc was already doing a great deal by providing humanitarian assistance.”

According to the article “public opinion across Europe that is highly critical of Israel's bombardment of Lebanon”. Since, if true, that is largely the result of the MSM’s somewhat one-sided and slap-dash reporting (see postings on this blog and others, much too numerous to mention) it is not surprising that Ms Dempsey obviously thinks that public opinion is right to be so.

So does Foreign Minister Tuomija who hastens to add that no blame must be apportioned. What the EU wants is a permanent Middle East settlement, though, one assumes charitably not the kind suggested by Iranian President Ahmadinejad.

Well, apart from humanitarian aid, which is not apparently getting through although 100 million euros have been committed since the fighting had begun and the rebuilding of the infrastructure, which cannot be done till it ends, what is the EU soft power proposing to do?

“speaking for the European Union presidency, called Thursday for direct talks with Hezbollah, which is regarded by the United States and Israel as a terrorist organization responsible for the latest Middle East crisis.

"Obviously, if you want an end to the fighting and have any lasting political agreement, Hezbollah has to be a party to it," Tuomioja said in a telephone interview from Cairo. "Hezbollah is part of the Lebanese Parliament and government."”

Since the French are playing their own rather devious game at the United Nations, now co-sponsoring a draft resolution with the USA, now moving away from it; since foreign ministers from France, Germany, Italy and Spain have been shuttling between the relevant capitals, all with different ideas and messages, it is very questionable whether Mr Tuomija really is speaking for anybody except himself.

Nevertheless, one rather wonders who, in his opinion, should be holding those direct talks with Hezbollah, a terrorist organization, proscribed in many countries. Should it be Israel? The United States? The European Union? And if the last of these, what exactly will the talks be about?