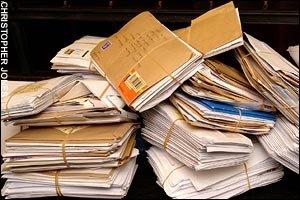 In The Daily Telegraph today, there is a strident editorial castigating the Post Office for introducing complex and unnecessary changes to the postal system on Monday, whereby mail is now charged not only by weight but also by size.

What the paper failed to note was that which had been pointed out by Christopher Booker last Sunday – the Post Office had no choice – it had to impose the changes to comply with an directive on opening up European postal services to competition.

An essential part of that is harmonising the basis of the charging regime and, as always, since we operate a different – and simpler – system, it is us that have to come into line. Never mind that we had a postal service before most of our European neighbours had countries.

Why the newspaper should have failed to mention the EU dimension is incomprehensible, but it is typical of a media which consistently avoids referring to what we so often call "the elephant in the room".

And, strangely, this failing has a great deal in common with the media coverage of the "Qana" incident. On this, we have complained about lies and distortions, but this is more of the same – albeit in a different league.

Being brought up as a good Catholic boy - by Jesuits, no less - I committed to memory the then version of the Catechism, and recall to this day the definition of a lie. It could be, said the book of words, an act, default or omission. Failing to point out something which is relevant to an issue and vital to the correct understanding of it – to the extent that false understanding arises as a result – is as much a lie as telling a direct untruth.

In that context, today's editorial is a lie. Worse still, it is part of a bigger and continued lie – the refusal of our media to inform us of the extent to which we are ruled by an alien government, based in Brussels. In its own way, that is every bit as important as the lies and distortions coming out of the Middle East and – in all probability – stems from the same wellspring of mendacity, sloath and lack of professionalism.

Either which way you cut it though, through the complicity of the media, we have a hidden government. And the worst of it all it that no one (and especially the media) seems particularly to care. I wonder how Americans would react if their government had moved offshore, say to Havana?