Why the Left is worried 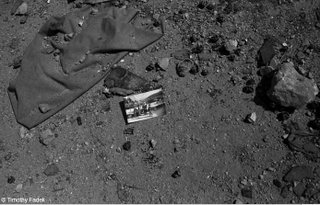 Belatedly, the Left is beginning to wake up to the danger of "Qanagate". But they're too late. They haven't even begun to realise how much evidence we already have, and how much more we have stashed away, ready to publish.

So far, the issue has been mainly the province of what are termed "right-wing" bloggers – such as our very own Little Green Footballs. And, to date, the stridency from the Left (not least in the hate-mail I have been receiving) has been focused on our critique as an example of pro-Israeli bias.

Only now that the cease-fire is in place in Lebanon (sort of) have they understood the real target – the liberal (not) media and its constant diet of lies and distortions in support of its favoured causes.

Thus, into the fray comes Huffington Post, with writer Michael Shaw declaring: "Qana was not staged", mounting what he thinks is a spirited defence of his beloved media.

To do so, he calls in aid free-lace photographer Tim Fadek, winner of the NPPA award for best still photography in International News in 2005 – who seems to specialise in faux art pictures from war zones – like the one above from Qana – which, of course, are not staged.

Tim, writes Shaw, "is recognised as one of the most respected photojournalists in his field" and, along with many of his colleagues covering the war in Lebanon, have become increasingly concerned over allegations fomenting in the States (particularly in the right wing 'sphere) about war photos being staged or "stage managed".

What we don't understand, you see – as opposed to those that were there like Fadek - is that "much is culturally lost - not to mention, politically filtered - in transit from East to West". Thus does Tim communicate this statement written by fellow photojournalist, Thorne Anderson on "how to understand the Qana photos". He writes:

Much of the debate about "staging" in Qana can be deflated a good deal by an appreciation of cultural differences. Among many Middle Eastern Muslims the display of the dead is very much a ritual part of dealing with death. Palestinian funeral parades, with or without media present, are a demonstration of this. While the display of the dead may appear callous and disrespectful to many western eyes, it is likely interpreted as a form of honor among those who actually display the dead - an attempt to give meaning to something senseless.

Photographing the display is not necessarily deceiptful (sic), but rather an honest record of the extraordinary ways people react in these terrible circumstances. And a rescueworker displaying a body does not a Media Mogul the rescue worker make. He/She is still a rescue worker. Though the caption for pictures from that portion of the event should read "Rescue workers display the body of..." rather than "Rescue workers remove the body of..."

Furthermore, the sporadic display of bodies at a scene like that shouldn't allow us to dismiss the event as merely a salvo in the "media war" being waged by "Hizbollah and their jihadi friends" in the "mainstream apologist media." And none of this changes the essential, and most important fact that a group of photographers put themselves at great risk to show the result of an Israeli air strike on an apartment building that left 28 people - among them 16 children - dead.

I took a gut wrenching tour of LGF [Little Green Footballs] and a couple of other blogs that are super-hyping the "staging" issue to an audience of hundreds of thousands in what is a transparent and in some cases explicit attempt to deny the simple fact that an Israeli airstrike killed 16 children in Qana. That assault on the essential truth is a far more reprehensible act of overt media warfare (if there is such a thing) than any angry display of a dead body in the immediate aftermath of an airstrike. Reminds me of those who deny the Holocaust for political purposes.

So, it seems, in questioning the Qana photographs, we are akin to Holocaust deniers. And, to reinforce the point, Shaw devotes a post on his own blog, where he claims that the "firestorm" coming from "the Rathergate crowd", and doubts now spreading from the left wing (which rather unsettles him) "can start to feel like all reason is being subsumed by political hysteria."

But never mind. This time, Fadek explains it all.

When there is senseless death in this part of the world, it is completely normal to display the bodies. Whether in plastic or on blankets, it's done whether there are photographers there or not. The idea is to ready the public for what has happened - and also say, look what our enemies have done to us.

Regarding some of the images cited as evidence of manipulation, Fadek said: "a finer distinction is being lost in the West":

In Qana, rescue workers did not hold up a baby to set up a shot. They were not displaying them to the media, per se. Yes, it was not lost on these men that the cameras presented a window on the world. But these people were doing wrenching rescue work and are human beings. They were shaking and sweating. These instances [of holding up babies] were mostly spontaneous and momentary expressions of anger. 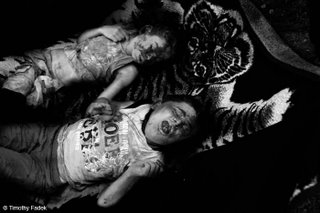 Fadek elaborates on the situation in terms of his own images, such as the "tasteful" one here (right), that he also took at Qana – which certainly, most definitely and absolutely was not staged. Although he felt the photo was more powerful depicted this way, he explained that a rescue worker did set down the body, briefly uncovering it for photographers to document.

For those inclined to consider the depictions as manipulated, Fadek also tells us:

Once removed from the collapsed building, these bodies were set on the ground to be taken down a hill. From this spot to the waiting ambulances was at least a four-minute walk. In this case, the two children were placed on this blanket where photographers had 1½ to 2 seconds to document them. Given the distance and the available manpower, the two bodies were placed on the same blanket to save effort.

In each case, we are told, Fadek's "understanding" was that the rescuers were doing something respectful, showing the victims in a manner reflecting a normal attitude toward the dead. "It's not a manipulation, it's a cultural distinction," claims Fadek. "It's the same as at a martyrs funeral, where faces are exposed, and the bodies marched through the streets. It's been done for years, media or otherwise."

Interestingly, that is exactly the line rehearsed by the egregious Kathy Gannon last Saturday, while Stern magazine last week also recruited Tim Fadek, who then told the magazine that he did not see evidence for a staging. He said:

Everybody was upset, it was quite chaotic. When they carried the bodies out of the basement, the workers themselves were finished. When they held a body to the cameras, it was nothing of a pose, but sheer distress and anger: look what they did to our children!

I don't know if Fadek actually believes this tosh but there is a common thread here, trying to pass off the "dead baby" incident (for that is what, obliquely, he is referring to) as a spontaneous display of "sheer distress and anger".

But what we already know – and have now documented - is that before the calculated posing to the camera with the dead baby, "Green Helmet" had already taken part in a carefully staged photo-shoot inside the wrecked basement. Furthermore, after the photo-shoot outside the wreckage, he went on to take part in two more, in different locations for two different photographers. 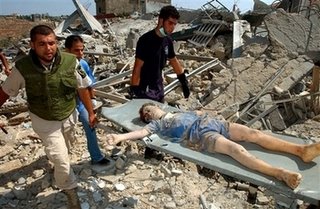 Then, in his artful description of the casualty evacuation process, Fadek tells us that photographers only had "1½ to 2 seconds" to document the dead children as they were laid in the assembly area, pending transport to the ambulances. But, if it was all so very tasteful and cultural, how does he explain the photo on the left or these?

What is more disingenuous (to be polite) is Fadek's failure to mention the staging area, the full role of which we ourselves have only recently understood (but, since we weren't there, we had to work it out). 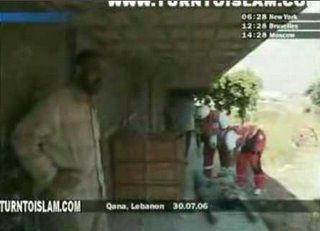 Using the evidence we and our readers have gathered, and our collective analyses, we have learnt that, at the assembly area, there was a macabre selection process going on. "Normal" or unsightly corpses were marked up for despatch straight to the waiting ambulances. Those which were especially photogenic or with dramatic potential were sent to this "staging area". From there, the media circus was organised, and the "props" issued to the actors, for the displays of theatre that we have already recorded (and have more to come).

By the time we have finished collecting and collating the evidence, and produced our full analysis, we will have a dossier which so damns the media that not any amount of Huffington and Puffington will be able to counter. Nevertheless, not a few of our regular and faithful readers have written to us asking when we are going to get back to the issues for which this blog was set up. But, as my colleague points out, we never left them.

The point is that, while we all fight our separate battles, we all have a common enemy that protects our individual enemies – a lying, corrupt, wholly inadequate media. It does not just lie on the Middle East. It lies about affairs on the Beltway, in Whitehall and Brussels, and everywhere else that its malign presence is felt. So, when we see a weakness in the fortress walls, we should not go on hacking at our own little bit. We should all pile in and put our efforts into creating a breach. That's why we, with many others, "piled in" to Qanagate.

And that's why the Left is worried.