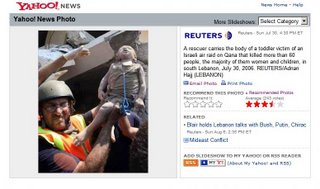 "Many in the blogosphere are using Hajj's misdeeds as evidence supporting the claims that photos in Qana were staged. I think they're making a leap," says Shane Richmond, web news editor of The Daily Hezbollagraph. Our Shane continues: 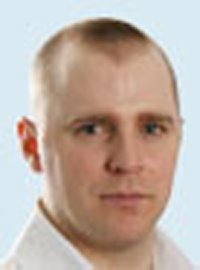 Hajj was at Qana but he didn't take any of the disputed photographs of "white t-shirt man". Of course, for many, if the honesty of one photographer is questioned then all are dishonest. This is a bit like saying that since some soldiers tortured prisoners at Abu Ghraib, all soldiers are torturers.

If anything, I think the Hajj case demonstrates that picture agencies are prepared to admit when they've made a mistake.

However, as I've mentioned before, whatever we do is seen as proof of our duplicity. If we admit our mistakes, we're asked what else we haven't admitted to. If we deny the claims against us, we're accused of covering up.

Nevertheless, I'm glad that we are being held up to this kind of scrutiny. Without it Hajj's images would probably not have been uncovered - Reuters clearly missed them the first time round. However, bloggers have to accept that sometimes we'll dismiss their claims, which is what has happened with the Qana photos.

How very noble of you Shane. But Hajj did photograph the "dead baby". We're not being disingenuous are we?

Jeff Jarvis on the Guardian website, offers his commentary on the issue.