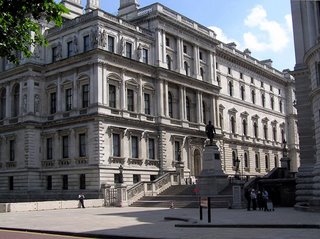 This is not another discussion about Margaret Beckett of Ye Olde Caravanne or whether Tony Blair has any real foreign policy ideas. As a matter of fact he does, but they are often rather muddled as most liberal foreign policy is.

What we need to think about quite carefully is the real question: who should be running our foreign policy and then, quite separately, look at what that foreign policy ought to be.

The media reaction as well as that of the great and the good to the reported events of this morning has been interesting but predictable. On the one hand, there has been a singular reluctance to specify which religious and cultural groups the 21 arrested belong to; on the other hand there have been the usual calls not to demonize the entire Muslim population of this country and, of course, the usual whining about us being targets because of Tony Blair’s foreign policy.

If we did not support the United States in Iraq and, even, Afghanistan; if we were only to demand an immediate cease-fire in Lebanon (though how we would achieve that remains something of a mystery) none of this would happen. We would not be a target to Al-Qaeda or to any of our home-grown little jihadists.

If this plot is real (and there are those, including at least one member of the forum, who think that this is merely an attempt on the part of the boys in blue and MI5 to prove that they are useful members of society), it must have been hatched for some months. How very prescient of the alleged terrorists (alleged is the right word as nothing has yet been proven in a court of law) to know exactly when the Israelis would go into Lebanon after Hezbollah and how even more prescient of them to realize exactly what Tony Blair’s policy might be, though one could argue that it would not matter to them: whatever it is, he is in the wrong, if he does not accept that Israel must be destroyed and Sharia law introduced everywhere. I exaggerate but only a little.

Furthermore, there is very good evidence that Al-Qaeda and jihadist cells have been growing steadily in this country since some years before 2001, never mind 2003. The idea that this is all a response to the post 9/11 policies, with all their corkscrew-like bends, is casuistic, to put it mildly.

Beyond that, there is the question of who decides on foreign policy and what is one to do if one disagrees with the government. There were various bitter comments about the lack of democracy in this country because the 1 million people who marched through London against the war in Iraq, shouting “Not in my name” were ignored.

1 million or even 2 million, many of whom were not British, do not a majority constitute. They are entitled to their opinions and allowed to express them in any way they like, as long as there is no violence towards others involved. But that is all. They do not write and ought not to write the foreign policies of this country. If they want to go and work for Respect, that is up to them. At least, that is an accepted method of changing policies in a democratic state.

The war was not in their name? Well, too bad. They were not marching in my name.

Even less can we have our foreign policy, regardless of whether we agree with it or not, be dictated by terrorists or would-be terrorists. For that is what is implied when somebody says that if we just changed our foreign policy, we would not be a target. Not only is this incorrect but it is a denial of the democratic process.

It is fair to say that in Britain, unlike the United States, Parliament has no say in the declaration of any war or involvement in any hostility. This may require urgent reforming (and is a far greater constitutional anomaly than the presence of a few hereditary peers in the Upper House), though that will not be necessary once this country is fully integrated into the EU’s common foreign and security policy.

However, the answer is not to give in to the half-baked demands of some misguided would-be suicide bombers. As these people are all British-born, one must assume they have gone through British schooling. In which case they do not even know where Lebanon, Israel, Iraq or Afghanistan are. And even if they go on holiday to Pakistan regularly, I doubt very much whether they could find Islamabad or Karachi on the map or tell you about the country’s history. You get on a plane, you fly, you get off the plane and you are there.

For better for worse we have an elected government. In fact, it has now been elected three times. I know all the arguments about people staying at home rather than voting for one shower or another but that is irrelevant. Three times running Labour under Tony Blair got more votes and more seats than the opposition. Therefore, he and his government are there to decide on our foreign policy.

You do not like it? Fine. Start campaigning against it, join a party that opposes it and try to give it a bigger profile, formulate arguments against it. But do not expect anything to change. If you go beyond it and try to change policies through violence, expect the law to bear down on you (though that has become a bit of a lottery).

Neither is our foreign policy to be decided by our media, who, though unaccountable in a political sense (and in the case of the BBC in every sense), has taken upon itself to pontificate on all matters and demand changes in government policy on its say-so.

In itself, that does not matter. The media has always given itself airs. (There is a story, which I have never checked out that in the mid-thirties, as the show trials were under way in the Soviet Union, Kingsley Martin, then editor of the influential New Statesman, wrote an agonizing article on the subject, ending it with the words: “Mr Stalin must explain.” I bet the old tyrant was shaking in his shoes.)

As I have mentioned before the MSM became very powerful in the sixties, in the United States especially but in Britain, too. Post-Vietnam, post-Watergate, the assumption was that it and it alone should decide on foreign and domestic policy and, as things stand, those decisions tend to be left of centre and not on the side of the West or of a democratic country, named Israel, that is fighting for its survival.

If the people, in their lack of wisdom elect somebody who does not agree with the media’s stated position then that election is ever after viewed as a political coup. That was true about Thatcher and Reagan and is even more true about Bush.

The bias and the assumption of superiority to all other mortals and, in the case of the British media, to all other specimens of journalism are so ingrained that they are no longer seen as bias.

During a recent conversation with a friend who works in BBC radio and is really quite sound on most subjects, I realized that said friend quite literally could not understand that there was something slightly wrong with equating Israel and Hezbollah.

The same media finds it impossible to understand that violence is not an abstraction that is simply a bad thing and, therefore, everyone involved in it is equally bad with the only criterion being the number of victims (though that does not seem to apply to Iraq). The idea that some groups initiate violence and others defend themselves, sometimes through pre-emptive strikes, simply does not enter their world-view. Yet they are the people who want to impose their views on the rest of us and insist that the duly elected government follow their instructions.

The appallingly low standard of the British MSM became clear once again over the Qana pictures and the saga of the Green Helmet Man. It is true that Stern and Die Zeit have produce articles to prove that the story as uncovered in the first place by my colleague is wrong. On the other hand, we had the Frankfurter Allgemeine Zeitung, Bild, Süddeutsche Zeitung as well as the Austrian Der Standard and the Neue Zürisches Zeitung covering the story in detail from a very different angle. And it is a German TV company that has produced the short tape of Green Helmet directing the filming of events in Qana. In other words, the German-language media is sitting up and taking notice of the staged films and photographs. Where is our superior media? Still blathering away in the shape of Shane Richmond and his self-regarding platitudes or congratulating itself, like the BBC, on publishing the corrected figures of the dead in Qana. What else had they intended to do?

The war against terrorism, whether it is fought in the Middle East, the Gulf or Europe is our war and in the course of it some startling truths have emerged, not least the fact that there are a great many people in position of some authority in this country who neither know nor care about what a constitutional democracy is. By a strange coincidence many of them are supporters of the EU. But not all, and that is frightening.