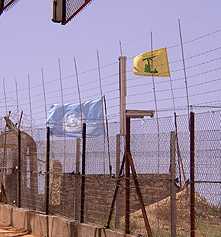 When Tony Blair came back from the United States and before he decided not to go on holiday (I am not sure what is happening about that) he admitted that there was a split in the Cabinet on what should be the British policy on Lebanon. The split was, presumably, between those who supported the PM in his “Israel has the right to defend itself and there should be a cease-fire soon but there is very little we can do about it” and those who rather forcefully insisted that “Israel is a nasty aggressive state, though we think Hezbollah has gone a leeetle too far but there should be an IMMEDIATE and UNCONDITIONAL cease-fire though, frankly, we don’t exactly know what we can do about it”.

So who was going to produce the cease-fire resolution? Well, the UN, of course. And it has, indeed, produced a draft resolution, sponsored jointly by the United States and France, an odd combination.

In yesterday’s Daily Telegraph Con Coughlin welcomed this new-found Franco-American entente cordiale, hastening to explain it in various ways. The French, he says, have come a long way from being the “cheese-eating surrender monkeys” of 2003, though, perhaps, not as far as Mr Coughlin likes to think. Possibly French fries are back on the House of Representatives canteen menu but France remains an obstacle to peace efforts in most parts of the world, particularly the Middle East.

“As the former colonial power in Lebanon, the French certainly have more to offer in terms of influencing Lebanese factions than Britain, but this is not the only reason for the emergence of this unlikely entente cordiale.

Apart from Iraq, where predictions of civil war daily lend Mr Chirac's anti-war stance greater credibility, the French have proved themselves useful allies of Washington on a number of issues relating to the war on terror.

It was mainly through the intervention of the Quai d'Orsay that the Syrians were persuaded to give up their occupation of Lebanon and allow the country to function as a free democracy for the first time in decades.”

If this is what one of our best journalists can come up with, we must really despair. What evidence is there that France has had any influence whatsoever over any Lebanese faction or Syrian decision? What actually happened on several occasions that these organizations showed out and out contempt for French attempts to negotiate and France reluctantly had to scramble to support the American position.

This is what happened during the Cedar Revolution and after the assassination of Rafiq Hariri (a particular friend of President Chirac’s whom the Syrians did not hesitate in blowing away).

Did Lebanon become a free democracy? Well free-ish, I’d say. A free democracy, one assumes, would not have large parts of the country controlled by an armed militia, whose loyalties are to other states, in this case Syria and Iran.

Mr Coughlin does, however, make a couple of other interesting points. Unlike our own miserable former Foreign Secretary Jack Straw, the French government adopted a “robust” position towards Iran, as it cocked a snook at the EU3 negotiators, of whom France was one. We can all remember President Chirac’s threats to use the French nuclear deterrent, should Iran threaten any French person.

As against that, one must point out that Philippe Douze-Blasty, the egregious Foreign Minister recently referred to Iran as a force for stability in the region. He then had to change his mind, when President Ahmadinejad informed the OIC that the obvious solution to the Lebanese crisis was the destruction of Israel.

None of that, of course, excuses Jack Straw’s idiotic behaviour and pronouncements though I found Mr Coughlin’s assertions that the previous two Foreign Secretaries were dismissed on demands from the Americans slightly odd:

“The Bush administration's deep-seated suspicion of the Foreign Office has already resulted in the removal from office of two foreign secretaries: the preening Robin Cook was dumped for criticising the American policies on the Kyoto Protocol and missile defence, and Straw was removed for pursuing his egregious policy of appeasement towards Teheran. Margaret Beckett is no doubt calculating that so long as the Bush White House has no firm policy on caravanning, she is safe.”

May I, once again, direct our readers to that priceless episode in “Yes, Prime Minister” that deals with the never-ending perfidy of the FCO.

Here are two tiny quotations from it (no, I cannot resist it, since you ask):

“Jim Hacker: "Apparently, the White House thinks that the Foreign Office is full of pinkoes and traitors."
Bernard Woolley: "No, it's not. Well, not full."”

Nothing much changes. But back to Mr Coughlin’s analysis of the new entente cordiale:

“But if Britain's star is in the decline, this is because Washington has finally woken up to the weakness of Mr Blair's domestic position and the ineffectiveness of the Foreign Office, which seems institutionally incapable of dealing with blatant threats to international security.

Sentimentality has never counted for much among the cold-blooded calculations of Washington's power brokers, and President Bush's courtship of Angela Merkel, Germany's chancellor, suggests that preparations are well under way at the White House to move on from the era of Bush/Blair.”

It is true, however, that throughout this crisis we have seen different European countries operating separately and paying little attention to the common European foreign policy. As far as the CFSP is concerned, it’s a case of another crisis – another black hole. Perhaps, even the American foreign affairs establishment (not really that much better from our own beloved FCO) has woken up to this fact. If yes, that is one good thing achieved.

There is, of course, no doubt that the behaviour of the Foreign Office and various aged diplomats is enough to make us all blush with shame. The Toryboy blog, which is shamelessly Anglospheric, has put up a picture of the way the Anglosphere has lined up as against the EU and UN leaders (David Cameron is on the side of the EU/UN but that is not a surprise).

There is no question that the FCO would be on the side of the various tranzis. So far we have had various ex-ambassadors and high ranking officials sniffily criticizing Blair for his support of Israel and the United States.

Oliver Miles, our man in Libya once upon a time, even said on Sky

“that the recent hostilities between Israel and Hizbollah had been caused by the construction of Israeli settlements in Palestinian-populated areas of the West Bank.”

The man really knows his history. Yesterday’s Financial Times carried a letter from Sir Leslie Fielding, Director-General for External Relations, European Commission, 1982-87, in which he took the Prime Minister to task for not caring enough about Britain’s vital national interests. No doubt, in his position as DG for External Relations, he toiled night and day to promote Britain’s national interests, vital or otherwise.

The letter is such a hotch-potch of special pleading and nonsensical misreading of history that it really needs to be read in full. For instance, it insists that

“The European Union has hitherto, and rightly, been a reasonably good friend of Israel, but alas one whom Jerusalem has tended to take for granted.”

Not so much taking for granted but viewing with a certain amount of wariness. What is missing from the letter is the EU’s (and Britain’s) unaccountable support for the late unlamented Chairman Arafat (on the basis that once in his entire life he was actually elected by a very dubious process) and refusal to acknowledge his kleptocracy or his continuing support for terrorism. Arafat was the greatest obstacle to that famed “two-state solution” that Sir Leslie huffs and puffs about and his destructive legacy is still bedevilling Gaza, the West Bank and Lebanon.

So any huffing and puffing Sir Leslie and his ilk might do will leave “Jerusalem” cold, I imagine, though as Mr Coughlin says:

In fact, a period of silence from all former FCO staff would be most welcome.

All this may well account for the American decision to use the French as co-sponsors of the cease-fire resolution, or it may have been simple tactical calculation. If the French are not involved they are likely to sabotage the effort. This way, as a few people have suggested, France once again toed the American line.

Well now, where do we stand on the UN resolution? Hard to tell, really. Now you see it, now you don’t.

The first draft appears to have been rejected by Lebanon and the Arab governments as well as Russia because it was apparently too pro-Israeli. The objections were raised because, although the resolution called for an immediate cease-fire on all sides, it apparently allowed the Israeli forces to remain in Lebanon until a part-Lebanese, part-international force was established on the border.

Hezbollah has announced that it will not cease fire or anything else until Israel leaves Lebanon. Israel, on the other hand, has refused to do so until Hezbollah has stopped firing rockets. It has, however, expressed an interest in the proposals of 15,000 Lebanese troops plus 10,000 international ones, probably led by France, to patrol the border.

Meanwhile, the German Foreign Minister, Frank-Walter Steinmeier has announced that he is going to the Middle East to attempt to bring all parties round to a support of the resolution.

Germany’s high profile in the diplomatic shuttling, incidentally, is almost entirely in response to Israel’s request (they probably don't trust the FCO either), though the government has rejected the idea of sending German troops in as part of the peacekeeping operation. In fact, it is not entirely clear who will send in those troops; nor is it entirely clear what the 15,000 Lebanese border patrollers will achieve, since they have not managed to achieve very much in the past.

Tony Blair has expressed his confidence that this time round (the UN Security Council is meeting at 3 pm EST) there will be an agreed support for the resolution. Well, maybe. One wonders what those who have been demanding an immediate demand for a cease-fire as a sort of panacea think of it all now. I suspect, when they said an immediate cease-fire, they did not mean on all sides, merely one that is to be imposed on Israel. The question remains: how is it to be put into effect.

Meanwhile, Rush Limbaugh has asked a very pertinent question. Why is the international community not demanding a cease-fire in Iraq? Why is there no outcry about the children being slaughtered there by the various terrorist groups? Can't wait to hear the response.