Spitting in the soup 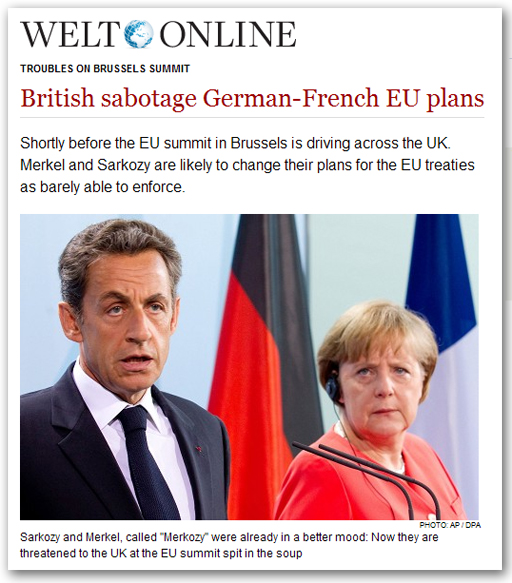 AFP reports that Cameron "has vowed to win concessions for Britain at the crunch EU summit … but he is likely to find his European partners in no mood for British intransigence". Capturing the moment, the Google translation may be less than perfect, but it still manages to convey Welt's vision of David Cameron spitting in the soup at the meeting, putting clothes on the AFP report.

Mary Ellen Synon is less than impressed though. "Memo to tough-talking Dave," she writes: "trouble is, Brussels knows you're a pansy"

That also seem to be confirmed by the AFP report. "Cameron's sabre-rattling did not impress his EU partners," it reports. One EU official in Brussels dismissed his vows as "purely for the use of domestic politics" and warned that Britain's partners would demand a spirit of "compromise" when they get down to the serious business on Thursday and Friday.

We are also told that a senior European diplomat went further, describing Britain as the "real problem". If Britain demands an opt-out on European moves to tighten the regulation of financial services "it would be unacceptable", the diplomat added.

Ambrose is not impressed by nuffink. A blizzard of silly proposals has hit the wires this week, he writes, as a legion of ministers, diplomats, commissars, high secretaries, and fellow travellers all lobby and conspire to create "momentum" behind pet themes.

In the meantime, he adds, nothing workable is actually on the table before the "summit-to-save-the-euro" on Friday. Be careful. Do not be distracted by Byzantine absurdities. And don’t listen to anybody who uses the term fiscal union. There is no such proposal. All we have so far is a Stability Pact with extra lipstick (Fiskalunion).

Putting the lid on Cameron's misery is the Spectator which publishes the Paterson interview and just for good measure we at last get to see the Van Rompuy proposal, cobbled together in cahoots with the commission, it seems.

It was never supposed to be like this, with "Europe" dominating the headlines, and The Boy on the back foot, responding to rather than setting the agenda. The Merkozy proposals have been carefully crafted, giving him no clear cause for rejection, nor necessarily triggering a referendum.

But such is the head of steam back in Britain that he has to do something, almost for the sake of doing it, putting him in a well-deserved lose-lose situation. The way he is going, The Boy is set to upset just about everybody, at home and abroad.

Left to himself, one could imagine that Cameron might like to do something more than spit in the soup for the "informal dinner" this evening in Brussels. Lethal doses of strychnine come to mind, guaranteeing a painful death for the consumers.

But instead, he is going to have to be sweetness and light, with that charming, boyish smile of his, pretending he is enjoying every minute of an experience that must be worse than having wisdom teeth extracted without an anaesthetic.

Well, The Boy wanted the power and the glory, and he's got it. But as the glory crumbles around him and the power turns out to be illusory, we can only savour the moment, and look forward to the next turn of the screw when it gets even worse for him. We're all in this together, we can say. We feel your pain.

And it could all be in vain, if the Dutch have a referendum. But just to keep things warm, Witterings and Helen pile in with their own brand of grief.