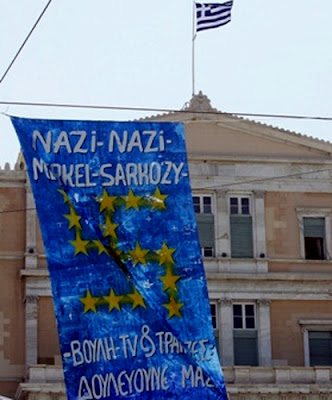 Jacek Rostowski, Polish finance minister, has called for "extremely forceful" action "to stabilise the markets in a very decisive way". Yet efforts to leverage the eurozone's €440bn rescue fund have fallen short of the €1,000bn goal set by member state leaders in October.

With Italy alone needing €400 billion over the next twelve months, the ECB is being hailed as this week's miracle cure for the euro, even if the ECB seems to have a different opinion on the matter. "Everyone knows what needs to be done to ensure financial stability", says Jean-Claude Juncker, the Eurogroup president, then adding, "I cannot speak, however, on behalf of the European Central Bank, which is very sensitive when people encroach too much on its independence".

Miracle cure number two is the IMF, which is also being slated as the organisation holding the get out of jail free card, although supremo Christine Lagarde denies that she is moving in to bail out Italy and Spain and fears of default there intensify. She dismisses any such talk as "rumours".

Meanwhile, in contrast to our feather-bedded wuzzies in the public sector, striking to protect over-generous pensions and cushy number that are unaffordable, if we had a chancellor and prime minister with the balls to admit it, Greek workers are striking for real today.

Another general strike is in the offing, with ferries and public transport disrupted, schools closed and state hospitals running with reduced staff.

This comes as eurozone leaders approved the next €8bn tranche of the second bailout, but with money pouring out of the country. Bank deposit outflows reached €13-14 billion euros in the September-October period, an annual jump of about 17 percent in October – and the flow continues unchecked. As fast as the money pours in, it drains away. It certainly isn't helping Greek workers.

The labour situation is somewhat graphically explained by Ilias Iliopoulos, deputy leader of the civil servants' union Aededy. They, he says – speaking of the "colleagues" - are creating a situation that can no longer be tolerated, can no longer be endured. Unfortunately people are in a state of somewhere between poverty and despair.

The measures are supposed to improve the country's financial situation, but the country is getting deeper into debt, unemployment is rising, and the recession - unprecedented in recent times - is worse than anywhere else in Europe. People are falling apart.

And, as reality begins to dawn, British banks and other institutions are being warned to prepare for the collapse of the euro.

There can be no one with any sense who believes that the single currency is now going to survive – it has got to the state where collapse has become the self-fulfilling prophesy. But we still have the charade to go through, with the winter European Council on 8-9 December, as the "colleagues" yet again go through the motions of saving the euro.

But we are back to the Poles, and Polish foreign minister, Radoslaw Sikorski speaking in Berlin yesterday. "The biggest threat to the security and prosperity of Poland today would be the collapse of the eurozone, " he says. "And I demand of Germany that, for your sake and for ours, you help it (the eurozone) survive and prosper. You know full well that nobody else can do it".

Therein lies the problem. Nobody else can do it. But Germany can't either. Thus, the next few weeks are regarded as a critical moment in European history. Not for the first time we wish the "colleagues" would get a move on and let it fail. Please let it fail.