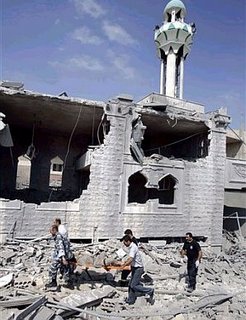 This, of course, is not just about Qana – the issue is far more profound. It is about how the media reports great events, its bias and spin, selling us an "agenda" whilst all the time telling us it is presenting the objective truth. But here we have some more photographs which throw into question that objectivity.

The first photograph, taken from the Jerusalem Post, shows up the pathway from the collapsed building, used by the rescue workers to carry the Qana victims to the fleet of ambulances. You can, in fact, see a stretcher party working its way up the slope. For reference purposes, we will call this "Stretcher Alley".

Now we see a sequence of "screen grabs" from a video taken at the scene, looking down the slope of "stretcher ally", reportedly from Aljazeerah. The camera initially pans round the scene and you can see from the angles that the cameraman is standing to the right of the ally. Note the screen grab (right), which shows the building in the background and, of especial significance, the triangular piece of wreckage projecting from the ground. We will come back to that.

The camera returns to the ally and focuses on "Green Helmet" marching purposefully up the slope, flanked by co-workers. The interviewer ignores the others and makes a bee-line for "Green Helmet"' He is clearly the "head honcho" so he is buttonholed for a prolonged interview. "Green Helmet" speaks in a high-pitched voice, excitable, gesturing behind him, to where the action seems to be. Crucially, having walked up the slope, he pants from exertion.

Into view then comes a stretcher party, coming round the base of the building at the bottom of the slope. They come from the left - that, we can assume, is the direction from which the casualties are being recovered. As they start up the slope, the interviewer and "Green Helmet" pause to look at the group. then "Green Helmet" dashes off down the slope to intercept the party and the camera concentrates on the group.

As the camera focuses on the stretcher party, and it is clear that they are uniformed Red Cross workers, with a posse of photographers in attendance – two of which we can see in the frame. Although the picture is blurred, note that the leading stretcher-bearer is wearing his helmet at a slightly raked angle. The cameraman on the right has taken a shot and is changing camaras to get another shot.

Now, fully in view of the cameras up the hill (which we see in other shots, "Stretcher Alley" having been staked out by the media), the stretcher party starts to walk slowly up the hill. Then, for no apparent reason (that we can discern), it suddenly comes to a stop. The workers put down their load, with one of the photographers hovering close by, over the stretcher. We can only guess, but perhaps they have been asked to stop by the photographers.

The sudden stop gives the photographer the opportunity to take a close-up picture of the victim. Now, this is a highly charged sitation, at a disaster scene, with all the tragic implications. But of more concern to the lead stretcher bearer is his appearance. He adjusts his helmet, putting it on straight, nice and neat for the cohort of camera crews and still photographers further up the hill. There is no sense of urgency and no rush. The pace is leisured.

All nice and tidy for the photographers now, and the photographers having completed their work, the stretcher bearers now resume their journey, ready to provide further photo-opportunities to the media. They they progress in a leisurely fashion presumably, towards the ambulance. In the sequence, they are then joined by "Green Helmet" who hovers around self-importantly. All the time, there is no sense of urgency or rush.

Now we switch – to the iconic photograph used by the Guardian on its front page. This is of "White Tee-shirt" carrying the body of the dead girl, escorted by "Green Helmet". By reference to the triangular piece of wreckage and the building in the background, we can position the scene – it is definitely on "Stretcher Alley", further up the long slope from where "Green Helmet" was interviewed.

While most of the casualties are being stretchered up this slope, this is different, and – unlike the earlier scene, "White Tee-shirt" is running. The caption given has him "screaming" for help. And here come the questions.

Why is "White Tee-shirt" (and "Green Helmet") running? Could they have run all the way up the slope, when "Green Helmet" was panting with exertion having walked up the slope – or has he just started running. And to whom is "White Tee-shirt" screaming for help? He is several hundred yards from the recovery site, and is on his way to the ambulance. For what purpose does he want help?

Now we have the final "iconic" shot – "White Tee-shirt" again. Over his left shoulder is the triangular piece of wreckage, but the camera angle is different. From what I can work out (and would welcome observations) he looks to me further down the slope, which would mean that this photograph is taken a few moment earlier. He is not running, and he is not "screaming", but shows enormous anguish. And "Green Helmet" is nowhere to be seen – although we know he is close by.

These shots were widely published – clearly their emotive impact was recognised by hundreds of editors. But nowhere do we see these graphic shots on video. Why not? Would filming have shown that the shots were staged?