Recently, our one surviving cat started behaving most oddly, waiting at the door to be let in as was its custom, only to run away in apparent fright when the door was cast open. Concerned that it was some while since it had last eaten, Mrs EUReferendum kindly left the front door wide open and unattended. With food just inside the hallway, she did thereby trust that the cat could be enticed to enter.

Thus prepared, she retired to the living room where, seized by the drama of the day as recounted by the hand wavers of the BBC via their television apparatus, she dropped into a fitful doze. Thereupon entered into the house a sneak thief who, creeping into the living room, happened on Mrs EUReferendum's handbag. She (for it was indeed a "she") took unlawful possession of the same and departed rapidly from the premises, but not before startling the Mistress of the House into wakeness.

In the ensuing hullabaloo, the miscreant was recognised by a passer-by at the top of the street, who informed me forthwith of the name and the address of the said person. Without delay, I attended upon the premises and, after knocking stoutly on the door, was confronted by her. Thereupon, I did most earnestly enjoin her to deliver unto me the property which she had so recently and unlawfully acquired. Shortly thereafter, Mrs EUReferendum was reunited with her handbag.

It has to be said of this adventure that the miscreant was not given any great list of options as to her course of action and, presented with some rather unpleasant possibilities, she had readily acquiesced to some helpful suggestions made by myself. It was this that led to the happier outcome.

And so to the Members of that august Parliament held in the Palace of Westminster, London. There did they dispose unlawfully to the European Union powers which rightfully reside with the people, not theirs but powers held in sacred trust, to be exercised by themselves, with due deference to the needs and temper of those whom they serve. 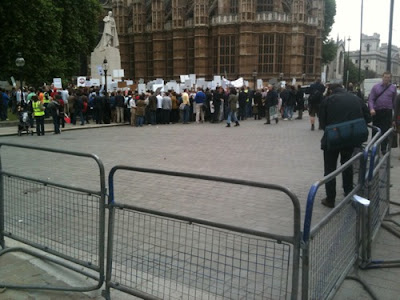 Acquainted as we are of the address of their premises, it did thus strike me that – as with our handbag thief - the best and probably only means by which we might secure the return of our property would be to attend upon the Palace of Westminster. But, in view of the scale and extent of the larceny, we would need to appear in such numbers and in such a manner as to be able to make it very plain to the denizens therein that no alternative course of action would be acceptable.

Such will in due course be necessary and, perhaps, from this little acorn (pictured immediately above), that great oak tree might grow. But I somehow doubt it. What is it about our so-called right wing that it feels impelled to parade its own weakness? But if that is surprisingly successful, what does failure look like?