Politics of the nursery 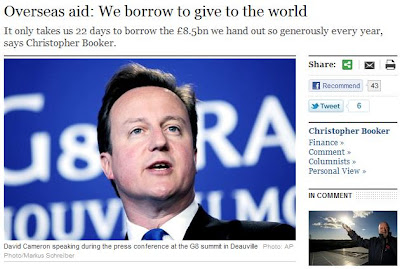 The revelation that the idiot Cameron bases his aid policy on having listened to Bob Geldolf on "Live Aid", when he was an 18-year-old, is staggering in its implications. Because a fatuous teenager listened to an etiolated pop star spouting gibberish, the British people now have to find £8.5 billion this year, rising to £12.5 billion by 2014.

But the fantastic stupidity of this comes home when we read via Booker that, despite the latest tax rises, the £10 billion the government had to borrow last month was the highest ever April figure on record.

Our revised borrowing figure for last year was just below £140 billion, which means that the government has been spending nearly £3 billion a week more than its income – and, despite those famous "cuts", its spending continues to rise.

It's good to know, writes Booker, that it only takes us 22 days to borrow the £8.5 billion we hand out each year in international aid, enabling that crass idiot who is pretending to be a prime minister to boast that we are the most generous country in the world.

But, if you think about it, here we are, borrowing money we don't have and can't afford, to give away to people who will most certainly misuse it, only for us then to have to borrow more money to pay the interest on the money we have borrowed, because we cannot afford to repay it.

Would someone like to suggest that, if we had an annual referendum on the budget, this one would be approved? But since Dave is in power, and has his armoured cars, his men in blue uniforms and machine guns, his gated community and armed guards, he can afford to ignore the unwashed masses who are forced to pay his bills.

And yes, it is the politics of the nursery – but it is backed by brutal force. Try not giving Dave his money and see how far you get.