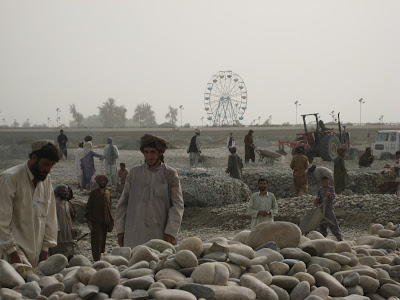 Dellers is going for broke, in a manner of speaking, on the British aid budget. He picks up on the Lashkar Gah Ferris wheel, part of a £420,000 DFID "park for women" scheme in Afghanistan, designed to confound the deadly Taliban. Dellers offers a vision of the lovely ladies of Lashkar Gah trying to eat candy floss through their burkas, as they sail over the top of the wheel. That is certainly one to treasure.

This story I raised on this blog in July 2009 - a story to which Dellers kindly links. But the issue back in 2009 was the death of Lt Col Rupert Thorneloe and Trooper Joshua Hammond, killed by an IED in an unprotected Viking personnel carrier. They could not travel in a mine-protected Mastiff because this 23-ton vehicle would have been too heavy for the weakened bridges over which they had to pass.

Strengthening the bridges might have been a useful way to spend some of our £510 million aid programme to Afghanistan, but DFID had instead elected to spend the money on issues such as promoting ''gender equality'' for Afghan women, of which the ''park for women'', complete with its Ferris wheel, was one.

Booker used the story in the Sunday Failygraph a few days after I had published it, and it was then used by The Scotsman. Even The Times caught up with it six months later. 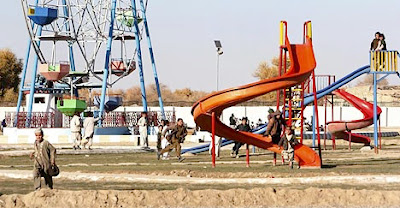 Even before I had discovered this extraordinary story, though, it had already been reported in February 2008 in the Mail on Sunday (picture above), that paper citing Tobias Ellwood MP, who later raised it in the House of Commons in June 2008. It was too early then to make the point about misdirecting money from more useful infrastructure projects, but the graphic stupidity of parking a Ferris wheel in the middle of a war zone makes the Lashkar Gah example the ideal motif for useless aid.

This and much more supports the Dellers theme that we do more harm than good with the aid budget, which should be scrapped forthwith, only a small amount then being reserved for disaster relief. But, despite his voice added to the growing clamour, Cameron is not for moving.

David Cameron's thinking on aid, writes Dellers, is of a piece with those of such towering intellectual sophisticates as Bob Geldof and Bono. He is the man in the crowd at the Make Poverty History concerts with the wrist bands showing how much he cares, and Sam Cam in her hippy threads next to him showing how much SHE cares, and if only we all cared as much as we do, well what a difference that would make…

Well, it wouldn't make any difference at all. Which is why Dellers tells us we don't want a hippy in number 10 Downing Street. What we do need is a man of courage and conviction. And that isn't going to happen for a long time.