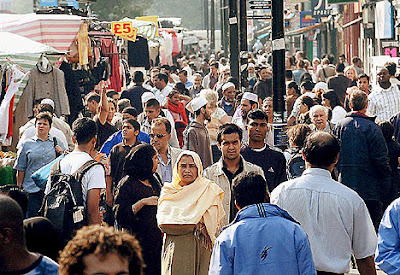 I meant to do this and this earlier, two pieces reporting the rise in the number of people from minority backgrounds who live in England and Wales. It went up 2.5million in eight years, according to the Office for National Statistics.

An estimated 1.75million of the rise came about because of immigration, while 734,000 was the result of rising birth rates. The increases meant the minority population increased by 37 percent between 2001 and 2009. One in six of the population is now from an ethnic minority or white non-British background.

Thus does Sir Andrew Green of Migrationwatch tell us: "This is the legacy of Labour's mass immigration policy now appearing in the official figures. They have, whether deliberately or not, changed the face of Britain". He continues, "If immigration continues on anything like this scale, we are heading for a population of 70million in 20 years' time, absolutely contrary to the frequently expressed wishes of the British people".

For all that, there is nothing here we didn't know, or haven't seen on our own streets. But the appearance of brown men in pyjamas and women in hiccups and basques – or whatever – becoming the majority in some of our streets, is something new. And it is objectionable. If they do not want to integrate, they should go home, or be sent home.

But hey! In Witney on sea (not), where Call Me Dave lives and the only immigrants are those who run the local takeaways, this is not a problem. But, like it or not, the seeds have been sown. They are not going to like the harvest, even in Witney.