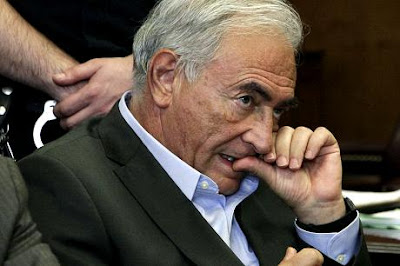 Now that DSK has resigned, he is no longer a player. What happens to him is now just theatre ... huge fun, but theatre all the same, set to drag on now that he has been indicted and bail has been granted. With his wife by his side (seen below arriving at the court), the heat is off for the time being.

Under terms of a revised bail package, Strauss-Kahn must post a $1-million bond, plus a $5-million insurance bond as a form of collateral. It is believed that he will remain under house arrest at his wife's Manhattan apartment residence and will wear an electronic monitoring device for 24-hours a day.

The man also has to pay for an armed guard to be present at all times. With his passport confiscated, making it impossible for him to flee the country, he has also waved his extradition rights. I guess he ain't going for a flight in that Airbus any time soon. 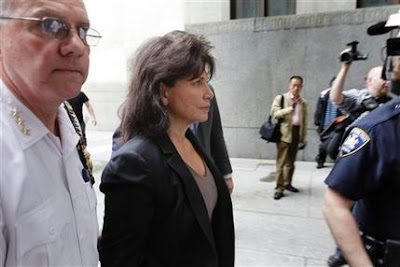 As to the broader issues, Edmund Conway thinks that DSK's departure was "another nail in the euro's coffin". But beyond the entertainment value, I am not so sure. These institutions tend to have values and dynamics of their own, to an extent independent of the individuals who run them.

On this though, I'm not going to be dogmatic, and am thus very much open to persuasion. According to the Conway thesis, without DSK at the IMF, the euro may have crumbled far earlier. His particular input was to allow the IMF bailouts of eurozone members Greece, Portugal, Ireland without insisting on restructuring, which would have spelled doom to the euro.

This is a point of view, and if halfway correct it means that the choice of successor is that much more important. In fact, that is now the real issue.

As to that successor, there seems to be a broad degree of agreement amongst the pundits that the need for a euro-supporter with a track record effectively rules out Gordon Brown – although it must surely have been in the realms of fantasy ever to have believed that he was in the running.

Where precisely we are going is, for the moment, speculation but, as the succession climbs up the agenda in importance, the relative higher level of publicity is going to remain with DSK rather than the beauty contest for his successor.

About this, though, we can hardly complain. Without DSK himself catapulting his post into the limelight, the succession would barely have had any attention at all. But then, as the lady once said, "it's a funny old world". And it gets funnier as each day passes.