What are they for? 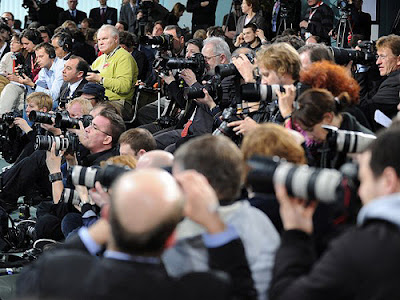 Reuters is keeping the DSK story on the boil, recording the soul-searching going on in the French media establishment, questioning the role of journalism in keeping quiet about DSK's known sexual peccadilloes. One reason cited for hushing up politicians' sex lives, it says, is that journalists fear for the jobs. Another is that many French journalists enjoy close personal relationships with leading politicians of all political stripes.

Christophe Deloire, author of a 2006 book called "Sexus Politicus" on the aphrodisiac nature of power in France that included an entire chapter on Strauss-Kahn, based on anonymous sources, said the events of the last few days showed there was a problem in France.

"The news obliges us to ask ourselves about the usefulness of journalists. What are they for?" he wrote in the daily Le Monde. "Journalists, who contribute to the public debate, should reflect on this before it's too late."

Looking at this in the round, one can say that there is some resonance here, where it is quite evident that our media establishment is far too close to the political classes. But there is no sign that any of them have either the honesty or even the understanding to initiate a debate. Like the Bourbons, they will go to their fate unknowing, uncomprehending, believing that they are the injured parties.