A model of chaos 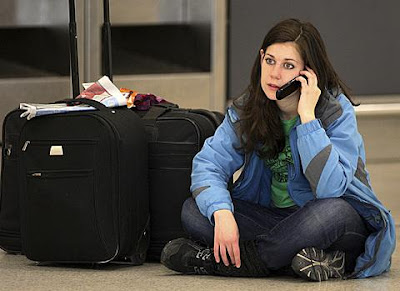 Thousands of air passengers have been hit by flight disruptions today as it emerges that aviation authorities and governments are still relying on inadequate Met Office models rather than real data.

Airline managers are complaining that last year, officials did not do enough to check the actual conditions in the air, instead relying too heavily on computer models showing where the ash was supposed to be. Yet, despite the experience, the International Air Transport Association (IATA) is saying that it is "astonishing and unacceptable" that a British aircraft that is supposed to check actual conditions has been unable to fly.

The disruption arises in part from "volatile winds" which are said to be carrying clouds of volcanic ash down from Iceland over the northern British Isles. But those same winds which caused the rough weather yesterday must also have dispersed the ash.

Without real data, however, forecasters are unable to provide accurate information on ash density and particle size, relying instead on weather patterns and computer modelling to give a rough approximation of conditions. And, with no clear guidance as to closure rules, the only significant difference between this year and last is that the weather conditions are more changeable, allowing more favourable estimates of ash dispersion to be made.

Given that last year's chaos forced cancellation of 100,000 flights, stranded millions of passengers, cost the industry $1.8 billion, and the global economy $5 billion, it is utterly bizarre that the authorities and the industry are not better prepared this time round.

Had the weather patterns of last year been repeated, there would be little to choose between this year and last – other than this year, with the benefit of recent experience of dealing with volcanic ash clouds, the authorities have even less excuse for messing up than they did last time.

Even now, however, local media such as The Guardian and The Daily Mail seem unable to appreciate that the system has once again failed. They are even allowing transport secretary Philip Hammond to get away with his cop-out, claiming that the situation is better than last year because he will not be imposing a blanket ban "like the last government".

It is up to airlines to decide whether it is safe to fly in discussions with the CAA, he says, not then pointing out that, without real data for airborne sampling, the airlines have no option but to take their safety case from the uncorroborated Met Office models.

It should be no part of the media's task to give the government, or the aviation authorities, a free pass, but the eagerness with which journalists seem to buy into an inadequate control model makes you wonder why we need an independent media. We might just as well cut out the middle man and feed off government press releases.