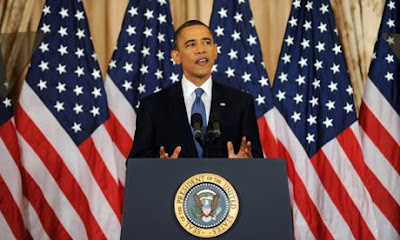 I actually watched the Obama speech, the whole damn thing, in glorious Technicolor – how sad is that? This is the one where he said that the US fully supported the Middle East uprisings.

This I now know, because that's what The Guardian tells us in its headline. But it is not something I drew from watching the speech – which says something about him, or me. You can call me out as a liar if you like. I didn't so much watch the speech as looked at it: a moving figure extruding sounds that conveyed absolutely no meaning.

Cameron did something as well, exchanging a warm handshake with Bahrain's Crown Prince, Sheikh Salman bin Hamad al-Khalifa, outside No. 10. This "came on the day when President Obama delivered his first major speech on the Arab Spring", which he said would open a "new chapter in American diplomacy". "It will be the policy of the US to promote reform, and to support transitions to democracy," Obama tells us.

And this we know because The Independent tells us, which means that Cameron is out of step, or something. Or perhaps he's in step, and Obama is out ... the Boy doesn't seem to make sense either.

Perhaps we should just content ourselves with the undeniable fact that there is "an historic opportunity" out there to be seized. Maybe, that's what DSK really thought he was doing, and just seized the wrong bit by mistake.

The thing one really loves about all this though is that all these people are telling all these other people that they should have the right to govern themselves. Why is it that we can't have same thing? Perhaps we could get DOBL to make a video about it.