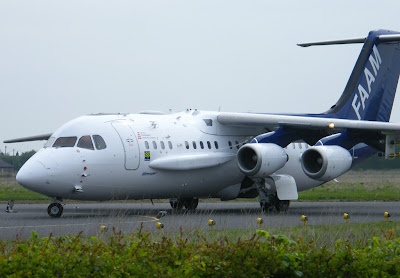 One of the many scoops broken by this blog was the story last year when we had the last Icelandic volcano eruption. Uniquely, we identified that the situation had been made inestimably worse by the lack of real time direct ash monitoring, owing to the shortage of aviation assets.

As we recorded last May, the one and only aircraft capable of carrying out the necessary monitoring, a BAE 146 operated by FAAM, was in the hanger with its instrumentation stripped out, about to undergo a paint job.

Now, a year later, the airlines are disputing the severity of the situation, and Ryanair is disagreeing with the CAA about the extent (or presence) of any ash in Scotland. Once again, there is an urgent need to carry out monitoring to find out exactly what is going on, and history is repeating itself. The FAAM aircraft is currently engaged on a full flying programme and is not available for volcanic ash sampling.

Of course, after the last episode, we saw the usual BS about "lessons learned", but since the lack of monitoring aircraft was never officially recognised, the most important lesson that needed to be learned was ignored.

One could get really savage about this, as the need was transparently obvious. To minimise disruption, we need an aircraft capable of being scrambled at a moment's notice, to bring back data on the precise situation in the affected areas.

But we even have Reuters telling us that EU officials say they have "learned the lessons from last year's volcanic ash crisis and have been discussing a UK-backed scheme that would place more control in the hands of airlines rather than forcing regulators to impose blanket bans".

The problem is, though, that this system depends first on assessing the amount and type of ash in the atmosphere - and only then allowing airlines to carry out their own assessments of the potential hazards. And, although there is other technology available, to make accurate assessments, a suitable and properly equipped aircraft is needed.

At least now the situation is not quite as bad as it was last year. By the end of the month, the FAAM BAE 146 has a fairly clear flight programme so that, if we have an extended eruption, the aircraft should be available for continuous monitoring.

Needless to say, though, this is not an issue entirely down to governments. It should be well within the capability of European airlines to get together and fund their own monitoring capability. As with governments, though, the industry appears stricken by short-termism and, after last year's crisis subsided, little has been done to address the shortfall in capability.

Nor is there any media adult enough to identify and write intelligently about the issues. As with last year, therefore, a lot of people are going to suffer unnecessary disruption, and they are not even going to know why.