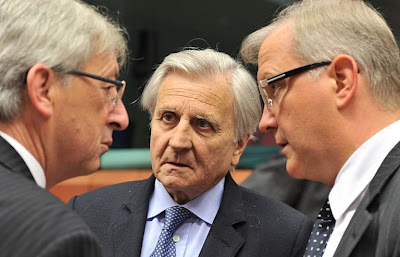 The three men pictured could probably walk the streets of any town in England and remain unrecognised. But, respectively (from left to right), in Jean-Claude Juncker, Jean Claude Trichet and Olli Rehn, you are looking at three of the most powerful financial figures in Europe. You may be aware that a fourth has been unaccountably delayed in New York.

Power, however, is relative. These men are not so much exerting their grip on events, as giving way, slowly, desperately, inch-by-inch, in the manner of a desperate climber holding onto a precipice by his fingernails, as the rock face begins to give way.

The rock face in this instance is the Greek bailout, and the absolute refusal of EU officials to consider the dreaded "r" word, as in "restructuring", itself a euphemism for default.

But now, following a meeting of the finance ministers from EU member states, and further consultations at officials level, there is now raised the possibility of a so-called "soft restructuring" – a limited restructuring of Greece's €330-billion accumulated debt, said to be almost 150 percent of GDP.

This is understood to involve extending repayment schedules and easing interest rates on the debt, and is dependent on securing "voluntary" agreements from banks and other private sector creditors, as well as the raft of government and institutional lenders. It is also conditional on the Greek government acceding to an EU/IMF demand that €50 billion is raised from a sale of state-owned assets.

The "soft" debt restructuring contrasts with the so-called "hard" restructuring, which involves part or all of the debt being written off, the route followed by Argentina or Mexico among the more notorious defaults in the recent past. This is something that the EU is struggling to avoid, fearful that of the serious repercussions for the whole of the eurozone.

Thus do the weasel words come pouring out, with talk of a "voluntary extension of loan maturities", "reprofiling" and "rescheduling". It all amounts to the same thing, giving Greece longer to repay what it owes rather than forcing the government to accept another expensive bailout.

Such are the political sensitivities, though, that Berlin – the biggest paymaster – is prepared to play only if other investors take what is euphemistically called a "haircut", so that its taxpayers are not the only ones taking a hit. And the reticence here signals that the German money machine is grinding to a halt.

But whether even this is enough to stop the rot is anyone's guess. Considering how far the "colleagues" have now gone – when they have hitherto been rock solid about demanding full repayment on commercial terms – there may well be even more to come.