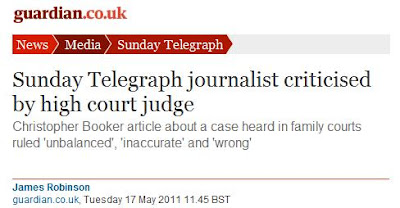 Completely unable or unwilling to address the issues raised by Booker on the child-stealing epidemic, The Guardian instead focuses on attacking Booker, on the basis of criticism by Judge Bellamy.

The thrust of the argument is that Booker did not attend the court proceedings about which he has written, demonstrating that James Robinson, the media correspondent is clearly unable to grasp the issues – viz that reporting restrictions prevent any details of the court cases being published. Every time Booker has sought to obtain details with a view to publication, he has been blocked.

When he originally posted the story, Robinson was unaware even of Booker's rebuttal in last weekend's edition of The Sunday Failygraph, leaving his piece more than a little unbalanced. But then, we don't expect Guardian media correspondents actually to read the work of the journalists they are criticising. Only now that he has been advised of the content have we seen a substantial silent edit. Being in the MSM means, as always, never having to admit you are wrong.

Moonbat is also at it, with such boring, repetitive predictability that it simply re-affirms that the man has lost the plot, and that the newspaper for which he works has given up any attempt seriously at reporting news objectively (or at all, in many cases).

The controversy of the stolen children continues, however, on a legal blog, an entry in the comments pointing out that even when a journalist from the Failygraph actually attended a court, he was not allowed to report any detail, rather making Booker's point. Unfortunately, we are not in the real world here, and any attempt at address the real issues gets lost in the miasma of prejudice and woolly thinking.

There is no hope here – reason has long departed.