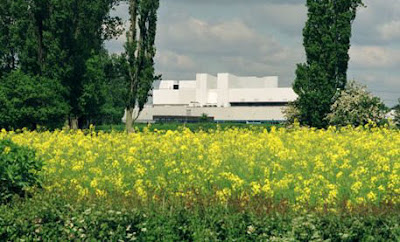 Thrown in with great fanfare at the end of the budget was Boy Osborne's "clever" tax on the oil industry, to finance a marginal reduction in petrol tax. But now we see the consequences of this particular piece of economic vandalism.

According to an "activity survey" by UK Oil & Gas, the tax will cost the UK £50bn and 15,000 jobs, scuppering at least 25 projects, accounting for over 1 billion barrels of oil and gas and £12 billion of investments. It will shorten the lifespans of 20 producing fields by up to five years, while investment earmarked for projects considered likely to go ahead over the next 10 years has fallen by 30 percent to £23 billion.

Also in the energy field, we learn that world-class research into future sources of green energy is under threat in Britain from the government's carbon reduction commitment (CRC) scheme, which imposes a tax on industrial electricity consumption.

Among the worst hit is the Culham Centre for Fusion Energy in Oxfordshire (pictured). It faces an estimated £400,000 payment next year, raising the spectre of job losses and operational cuts. "Considering our research is aimed at producing zero-carbon energy, it seems ironic and perverse to clobber us with an extra bill," a senior scientist at the lab said. "We have to use electricity to run the machine and there is no way of getting around that".

The Prospect union is urging the government to exempt energy use where the focus of research contributes directly to public good and government policy. "This [tax] will have a negative impact on important research into low carbon energy sources and that cannot be the right consequence of a policy the government is pursuing to promote a low carbon economy," said Sue Ferns, head of research at Prospect.

Another Oxfordshire laboratory, the Diamond synchrotron light source, expects a £300,000 bill under the CRC. A spokesman said the lab hoped to offset the bill by investing in better climate control and motion-sensitive lighting.

At the Daresbury laboratory in Cheshire, the CRC bill will worsen financial woes that have forced managers to draft redundancy packages and consider cutting back on equipment. "Science is already struggling here and now we are being charged an additional premium to go about our everyday business while working to address the government's own stated grand challenges in science for the 21st century", said Lee Jones, an accelerator physicist at the laboratory.

Readers will also recall that last year the government bought £60,000,000-worth of "carbon credits" for Whitehall and other government offices in the UK, as well as British Nato bases in Europe – another facet of this insane system that is going to damage our energy research effort.

And thus do we have exposed the cruellest fiction of all, that the government actually knows what it is doing, and is capable in any respects of managing its affairs.