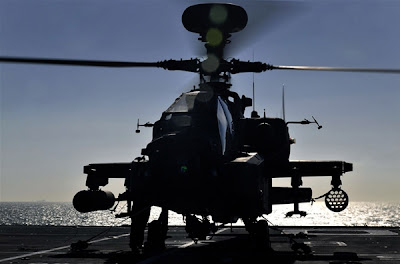 You might have thought that the end of the very last British mission in Iraq might have triggered more discussion, especially with David Miliband complaining of the failure "to develop a proper strategy for peace".

However, no more can the media intelligently discuss Iraq than it can the current operations in Libya, where we now hear that British and French forces are planning to deploy attack helicopters in an attempt to break the military stalemate.

Bizarrely, with the British offering three Apache helicopters operating from HMS Ocean (type pictured) – and a fourth to join shortly - The Guardian calls this a "significant escalation of the conflict". Thus, according to this newspaper, after 300 GR4 Tornado and 140 Eurofighter sorties flown against Gaddafi's forces, with the release of approximately 240 munitions, the use of the relatively lightly-armed and extremely vulnerable Apaches represents a "significant escalation".

Nevertheless, it is acknowledged that the operation of these aircraft will be "risky", but "reflect deepening frustration among British and French defence chiefs about their continuing inability to protect civilians". It is said that they can manoeuvre and attack small targets in relatively built-up areas. They can thus deal with Gaddafi forces who have shed their uniforms, and are using civilian vehicles and hiding armour near civilian buildings, including hospitals and schools.

The paper goes on to say that the decision to deploy the helicopters is a clear recognition that high-level bombing from 15,000 feet cannot protect civilians who continue to be attacked by rocket and mortar shells. It brings the NATO "offensive" much closer to the ground at a time when Britain and other coalition countries are insisting they have no intention of sending in troops.

The decision, however, is also a recognition that, when it comes to military assets available to the coalition partners, the cupboard is bare. While the US could deploy – if it so wished (and briefly did in March) – the highly accurate AC-130s and A-10s, there is nothing similar in the coalition armoury.

And, if the British are having problems, the French are in even bigger trouble, fielding untested Tigre attack helicopters and the antique Gazelle, so noisy, slow and fragile that it was withdrawn from British combat service in the Falklands after two were shot down by small arms fire (apart from HMS Cardiff shooting down XX377 in 1982 - which they tried to cover up).

Yet, even as the coalition struggles to maintain a credible force, Obama meets Cameron later today. Both, we are told, will vow to push for democracy throughout the Arab world, heedless of the irony that democracy has been all but abolished in the UK. But they will also pledge to threaten military action as a last resort against regimes that kill their people.

What no one seems to want to mention, though, is that current events illustrate that our armed forces are ill-equipped and structured for this intervention role. As time goes on, we will look more and more foolish, while the expenses mount, with very little achieved.

Despite this, neither the media nor the politicians seem able to pull the plug. Unable to understand the root causes of their own failures, they leave not only the physical but also the intellectual cupboard bare.