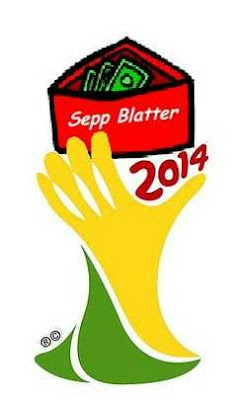 Sepp Blatter, the Fifa president, addressed the media in Zurich this afternoon and insisted that Fifa was not in a crisis. "Crisis? What is a crisis?" he said. "We're not in a crisis". And to make his point, he also emphasised that there would be no investigation into the decision to award the 2022 World Cup to Qatar.

And that took the first 20 minutes of the BBC main evening news. In fact, it was still going on when I turned off the TV. Even if this was vaguely important (international football corrupt, shock!), we see once again the MSM unable to act proportionately, obsessed by specific issues and unable to see the news in the round, much less report it.

Therein lies a serious problem for, while the media narrow down their focus, effectively handling only one issue at a time - of its choosing - many other things are happening that go unreported. The inability of the MSM to see this, and deal with the news agenda responsibly, is perhaps its greatest betrayal.

Any which way you look at it, the first 20 minutes of the main evening bulletin devoted to this subject is over the top. As if we did not already know it, the state broadcaster has lost the plot.