Good news – for once 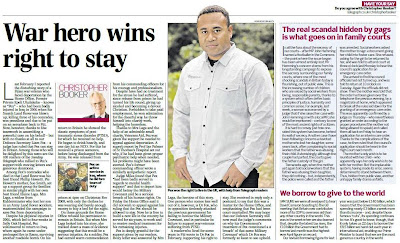 For once, we are able to tell a good news story in the Booker column, with the determination of an immigration tribunal which has permitted Epeli Uluilakeba "Pex" to stay in this country. This is the story we covered in February, with an update and then again in March, with a further reference later in the month.

Hero of the hour was Elaine Laga, a widow from Kidderminster who lost her son in an Army Land Rover accident. It was she that masterminded the campaign to save Pex from deportation and, without her intervention, I am pretty sure the outcome would have been very different. With the generosity of EURef and Sunday Telegraph readers, who delivered some very necessary cash at exactly the right moment, and with the further assistance of Veterans Aid – the only services charity worth a light (please don't start me on the British Legion) – Pex was pulled back from the brink.

What was also particularly pleasing was that Pte Steve Baldwin, the only other soldier (of five) who survived the bomb in that Snatch Land Rover, back in al Amarah in 2005, came to give evidence at the tribunal. His story is remarkably similar, told in the Independent on Sunday after he too had suffered post-traumatic stress disorder and then been kicked out of the Army because of his "temperamental unsuitability".

In 2007, The Independent was all over this story, with several bleeding heart pieces, including strident talk of betrayal. But that, of course, was when the paper had a political agenda, as indeed did the others – none of which were interested in Pex's story, apart from a brief input from The Times.

Equally, before the general election, the now defence secretary Liam Fox was full of the injustices done to soldiers by the last administration, but when he was asked for help in this case, response there was none.

Yet Pex was examined by Prof Ian Palmer of St Thomas's Hospital, who concluded that had he been given proper psychiatric help when needed, his problems might have been averted. And, on the basis of that evidence, immigration Judge Miles found that Pex "had been badly served in regards to mental health support" and that to deport him would betray the Military Covenant and be a serious breach of his human rights.

All we got from Fox, when one of Booker's readers wrote to him, was a postcard to say that this was a matter for the Home Office, and emphasising that Pex had been court-martialled. We hope that he will now read the judge's comments on why his government's treatment of Pex constituted a breach of that same Military Covenant which Fox was formerly so keen to see upheld.

For my part, I hope that there is a special area in Hell reserved for politicians who exploit misery and suffering for political gain. That is where Fox deserves to be, a low-life, totally unprincipled politician who would do anything to advance his own career.