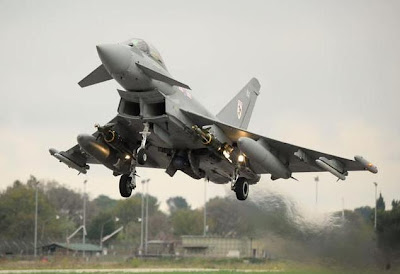 One RAF engineer just back to the UK from Cyprus said: "It's always the fast jet pilots that ruin it for the rest of us. "Some of us have been toiling for 16 hours a day in searing heat, but because of the stupidity of these pair of plonkers we can't have a cold beer at the end of the day. It's a disgrace".

There is an unwritten two-can rule in the RAF, the limit to which crews should abide, but Torando [sic] and Typhoon pilots in Gioia have a reputation for hard-partying.

So intones The Sun, commenting on the "inappropriate behaviour" of "Our Brave Boys", who last March got drunk as skunks and had to be sent home in disgrace.

Rumour has it that these were quite senior officers, but I still can't make up my mind whether I'm amused or appalled. On balance, my preference is for jet jockeys flying £75 million aircraft, bought at the taxpayers' expense, to be relatively sober.