The power of an idea 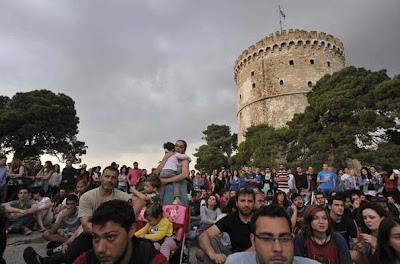 There is a reason why the British media are ignoring the current demonstrations in Athens and Spain. They are intrinsically anti-establishment, which means they are beyond the pale. The media is the bastion of the establishment in this country and elsewhere, setting and controlling the agenda, keeping minds off the terrifying prospect that people are clamouring for power.

I'm going to write another of my on-line essays today, exploring this theme, and picking up some of the ideas rehearsed on the forum over the last few days. Hence, there is a "work in progress" sign up, and I will keep adding to this until it is finished.

Worthy of note, in the interim – the contagion seems to be spreading. In Paris, hundreds took part in a protest rally at the Bastille Square, in solidarity with demonstrators in Spain calling for a popular democratic uprising among Europeans. This could be something – could be nothing. But sure as Hell, the British media is ignoring it. The lack of coverage cannot be accidental.

Even the broader detail seems to be evading them, such as Friday's news that Greece was close to a run on the banks. From the early morning, there was serious pressure for withdrawals on deposits, especially small amounts.

The pressure began last Wednesday and it was significant that, on Thursday and Friday, an estimated €1.5 billion had been withdrawn, bringing the May outflow to at least €4 billion, up from €2 billion in April. The majority of withdrawals were made by pensioners and small savers, with amounts ranging from €2-3000, then increasing to €10-15,000.

But if we get nothing of this from the media, it will be for much the same reason we get 1,040 results on "referism" in the blogs and 3,760 results on the web (up 700 in two days), but then: "Your search - "referism" - did not match any documents". That is in the news section ... the voice of The Man - who wants to control the message and the agenda.

The media will be second-last to know. Those who rely on the MSM for information will be the last – as always. This is why so many politicians are so ill-informed. And part of the technique for keeping its readers (listeners and viewers) ill-informed is to project situations like the Greek financial situation through a conventional political prism, as if this were normal politics.

Thus we have CBSNews reporting prime minister Papandreou, "buffeted by negative polls and protests" vowing to continue his fiscal "reforms", telling us they are "painful", but they are starting to pay off and the economy will return to growth in 2012. This ignores the fact that, with a national debt 160 percent of GDP, no amount of such reforms will make the difference. This is not normal politics. The situation is unsustainable and irrecoverable.

But, where elements - relatively small factions at this stage, the 50,000 occupying central Athens compared with the 500,000 that the unions can routinely deploy - seek genuinely to force change, the media response is to characterise them as "anarchists".

This, we have seen with The Washington Post, which glibly talks of "a breakdown in the rule of law", failing to recognise that the criminals reside more in the portals of power than on the streets and that – as far as violence goes – the police are as much responsible as the people. 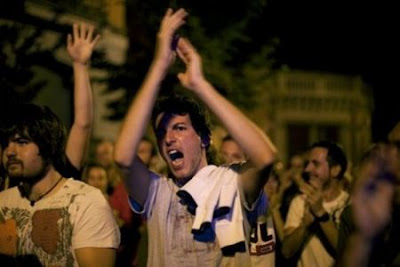 And, in the current round of Spanish protests, the demonstrators are at pains to emphasise the non-violent nature of their activities and their lawful behaviour, even if there are outcrops of violence from the so-called M-15 movement. And, as they begin to frame their demands to put to the parliament in Madrid, what they seem to be asking for does not sound very different from what we want – the ability to control their own governments.

That, then, is the "idea". Across Europe, in separate towns and cities, people are coming to the same conclusions - the systems of democratic control are no longer working, and somehow we need to reassert control. We the people want control. And the power of that idea is unstoppable. Even if those with the power are not going to relinquish it easily, they will eventually have to concede.