Never heard of him 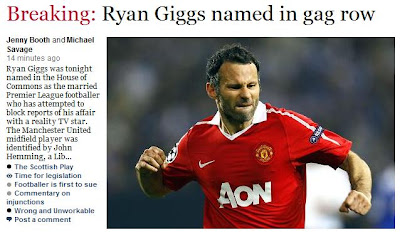 Should I be bothered about the media being prevented from naming someone who has had an extra-marital affair, a person whom I do not know, would not recognise, and have not even heard of? Do I even care in the slightest what this person does or has done? Could it be that the total extent of my interest is summed up by the phrase, "couldn't give a tinker's damn"?

But that we should now have both parliament and the man pretending to be our prime minister getting worked up about whether it is "fair" that the newspapers are not allowed to name this person (even if they now have), is rather disturbing. We have long become accustomed to the media babies having lost any sense of proportion or sense. But when our politicians follow down the same path, we are in serious trouble.

It is perhaps even more disturbing, though, that the media should go to the wire on this issue, confronting the judges on a matter of such banal triviality, while shying away from so many far more important issues because there is a hint of legal action.

One would not have thought that even our media could have sunk so low but, since their main trade now is to retail sleb-tat, it is perhaps unsurprising that they go to such extremes to preserve access to their raw material.