The gentle art of revolution 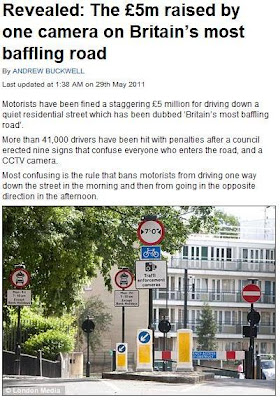 The Mail on Sunday is telling us that "motorists have been fined a staggering £5 million for driving down a quiet residential street which has been dubbed 'Britain’s most baffling road'".

More than 41,000 drivers have been hit with penalties, the report goes on, after a council erected nine signs that confuse everyone who enters the road, and a CCTV camera. Most confusing is the rule that bans motorists from driving one way down the street in the morning and then from going in the opposite direction in the afternoon.

Elsewhere, in my little urban village, a decision was made some time ago to make our market square – which had become the overspill area for the local pub - into a strict no parking area. Transgressors would be clamped and charged a king's ransom for release.

From amongst the many, a van appeared and, from the cavernous rear appeared a petrol-driven grinder ... the sort of thing one keeps for such contingencies. Only a very few minutes later, the victim was free and the broken clamp was being paraded through the crowd in a scene reminiscent of the fall of Bagdad.

At this point, the clampers rather unwisely decided to put in an appearance ... whereupon the now merry crowd decided that their van would look much more artistic if it was upside down. Shortly thereafter, we had the entertaining sight of two clampers departing at high speed ... never to be seen again.

Now, I am not suggesting that the residents of Camden should resort to equipment such as grinders. Aerosol spray paints, thermite and burning tyres would do just as well. Alternatively, there could be a peaceable way of doing things. At the annual budget referendum, the voters could reject the budget – and keep rejecting it until there was an undertaking that the officials would be brought under control.

You see, Referism isn't about money. It is really about power and control. There is an age-old sanction applied by harassed parents over their errant offspring. They stop the pocket money. When councils start taking the micky, you have a choice. You burn down the town halls, or you develop a system of reasserting control ... which enables you to stop their money until they come into line.

The big problem we all have here is belief. For centuries, we have been told we need leaders and governments to tell us what to do. We don't. For sure, we need governments, but the deal is we tell them what to do. But there is no point in looking to the wuzzies of Camden, or Notting Hill, for a lead. No revolution or meaningful political movement ever started in the capital.

We build our strength and then we march on London, grinders at the ready, and show the metro-wimps what to do.