Time for a stroll 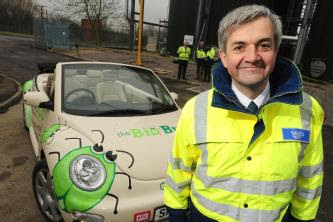 Ordinarily, I would tend to sympathise with anyone caught with speeding points and not be too critical of attempts to game the system. I managed 26 points on my licence before they finally caught up with me, giving me a five-month ban, so I am not exactly in a position to get on my high horse.

But one is always prepared to make an exception for Chris Huhne. Nothing I ever did in escaping the wrath of the system was ever illegal – but this prize hypocrite not only seems to have resorted to perverting the course of justice, he is a bully with it – and a liar.

When you add to the fact that this scheissen is also a Limpdim, one has to observe that there is something particularly low-grade about the current rash of politicians of this persuasion. But he is very much from the Cleggeron "rules are for little people" school. It will be interesting to see if plod does feel his collar, even though the "offence" was allegedly in 2003.

I am told it makes me sound terribly extreme if I suggest punishments to fit the calibre of these people. I should be calm and measured. Therefore, one will not offer any suggestions in this respect. Instead, I will record my regret that ministers are so busy these days that this one could not find the time for a gentle stroll last Friday. There is a Bulgarian I would have liked him to have met.