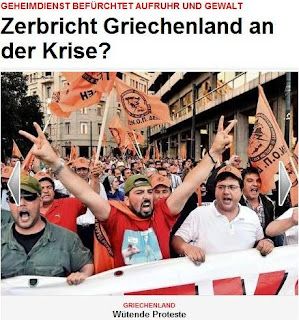 If you talk to the serious men – not the stupid, empty politicians and their media claque, they will tell you of their concerns ... and you can see it in their eyes. They know full well that the collapse of a currency is a life-changing event and, for many, will become a life-ending one.

Now, those concerns are beginning to leak to the surface – nothing that any intelligent observer could not have worked out for themselves, and the thrust of much of what we have been saying. When the collapse comes, this is not going to be contained.

Letting the cat out of the bag, however, is the German popular daily Bild, which has got hold of a CIA report warning that the tough austerity measures and the dire situation in Greece could escalate and even lead to a military coup.

This in repeated in the Turkish press and you can bet your sweet life that Ankara is monitoring the situation very closely. A military junta on its doorstep, perhaps looking for foreign adventures to keep minds off domestic troubles, is not what is wanted at this juncture.

The point is, though, that there is no sensible person who now expects the Greek government to avoid default. Most certainly, the rest of the PIIGS will follow, and the knock-on effects will be catastrophic. Furthermore, it is by no means certain that the contagion will stop there. Spain is almost as vulnerable, and the history of military control more recent.

The situation is almost has the feel of the spring days of 1939, as the storm clouds gathered over Europe. By the winter to come, one might expect the political shape of Europe to have been completely remodelled, the effects of which no one can foretell. 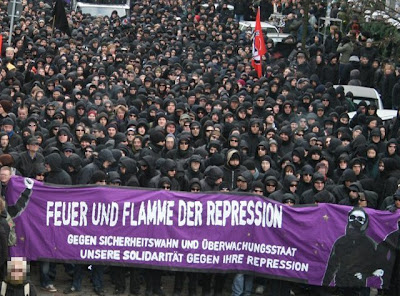 Currently, therefore, Twitter, footballers and X-Factor slebs should not be top of the agenda – but it is perhaps indicative of the intensity of the storm to come that the British media, instinctively, is adopting the ostrich pose. It did it before WWII and, as the darkness gathers, it is doing so again.

On the bright side, it may take several years – even a decade – for the instability to spread to the UK, giving us time to adjust. The problem is, though, that there is no sign of a Churchill waiting in the wings, ready to lead to nation to the sunlit uplands (not that he ever did). But there is not even the prospect of a "finest hour" for us with lightweight fools such as Cameron in the driving seat. With him it may be our darkest hour. But how dark – and how fast it will arrive - no one yet knows.