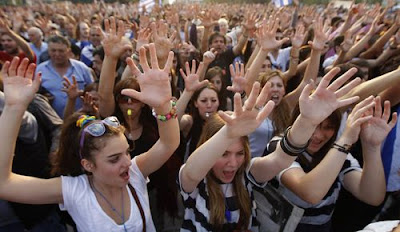 As the situation in Greece comes to a head, Purple Scorpion is not impressed with the Greek protesters in Constitution Square. Rather than the start of a revolution against corrupt politicians, he ventures that we have "spoiled children" at play, imbued with an over-developed sense of entitlement.

With The Guardian weighing in to support them, one is inclined to agree, although I would like to think that we have both dynamics at play. And if the front ranks are spoiled children with their hands out for more (of our) money, well ... as was remarked recently by an anonymous cynic, someone has to soak up the bullets before the hard men get down to work.

Nevertheless, we are treated to a high-intensity "stream of consciousness" narrative from The Guardian, which notes a banner which has "flapped in the wind for almost a week surviving the rigours of sun and sudden downpour". Its "fading slogan" summed up the mood of the nation at the centre of Europe's debt crisis: "We want our life, we want our happiness, we want our dignity," it declared. "So out with the thieves and out with the IMF".

Suddenly, the newspaper achieves the impossible and has us rooting for the riot police, yearning for them to wade in and bloody a few of these Socialist wuzzies. This is not revolution but special pleading by a privileged minority.

"Openly we say that we have been inspired by the demonstrators in Spain," says arch beneficiary Simos Adamopoulos, an organiser who has spent three nights sleeping in a tent in the square. "Our motto is 'the battle that is never waged is never won.' We will stay here, and in squares up and down the country for as long as it takes".

Says Adamopoulos, "we're also really disgusted with the system, with the political establishment, with all those crooks and thieves. As we've got poorer they've got richer and that you could say is also spurring us".

Not least of Greece's problems, though – we are reliably informed – was an ill-considered period of electoral bribery during 2004-2009 when public finances fell apart after the government neglected to collect taxes to the tune of €93 billion. Chickens, as they say, are coming home to roost.

However, this does not stop a welter of accusations about the sale by prime minister Papandreou and members of his team of $1.3 billion-worth of credit default swap contracts (CDS on Greek sovereign debt) on or around December of 2009, shortly after coming to power.

The gist of the allegations rest on the charge that the insurance protecting against a Greek default was bought during the spring and summer of the same year, by the Hellenic Postbank, a public banking arm of the Greek government.

That insurance, it is charged, is today worth approximately $27 billion, which would go a long way towards preventing the privatisation and sale of the nation's assets.

Unfortunately, we are told, the Greek government sold the contracts in December of 2009, for a paltry 40 million dollar profit, to a private firm for "high net-worth individuals" founded in 2009, by the name of IJ Partners, the vice president of which shares board membership on a separate NGO with the prime minister's own brother, Andreas Papandreou Jr.

Thus we are pitched in to the minutia of Greek politics, without the information or background to understand what is going on, although with enough knowledge from our previous researches to know that the system is deeply and fundamentally corrupt. We are tempted to say a plague on all their houses, except that the UK is one of the IMF guarantors and we will have to pick up a large part of the bill - and the Greek prime minister is, of course, part of our government.

What one can observe from all of this, therefore, is that we need to be better informed of events which threaten to have profound repercussions, the nature of which we only dimly understand. If there is to be a revolution, we need to know which side to cheer.