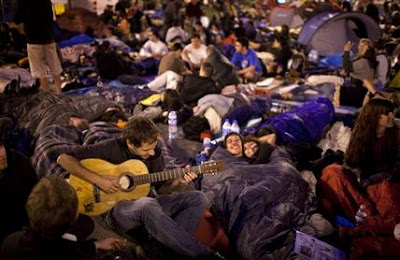 Numerous media reports attest to the extraordinary situation in Spain, where the ruling Socialist party is headed for a bruising defeat in local and regional elections held yesterday. As elsewhere, in Europe, the Left is taking a caning and the Right is picking up some of the spare votes.

But the elections in Spain are being conducted against a background of mass protests, with protest camps, mainly of young people, springing up in cities all around the country. They started a week ago and swelled to tens of thousands of demonstrators who on Saturday defied a government ban on gatherings the day before an election.

We are told that the growing protest movement reflects the strong disillusionment felt by Spaniards toward a political system they say favours economic interests and political fat cats in both major parties on the right and left over ordinary people.

But there is a strong resentment being expressed against what are felt to be "indifferent and corrupt politicians", and the protesters have dug in for another week of what are undoubtedly unprecedented sit-ins and rallies. More demonstrations scheduled for 28 May, and there is a sign reading "revolution" in large Arabic letters is in the square in Madrid where the main demonstration is being held.

One cannot help but compare events here, with the smug, preening debt rally in Britain, and the current obsession with outing promiscuous footballers. One yearns for some grown-up, serious politics, but fears the regression to childhood is irreversible. The youth of Spain are showing us the right way, but there are too few over here listening, locked as they are in their eternal bread and circuses.

As we live through an epidemic of stupidity, these are dark times.