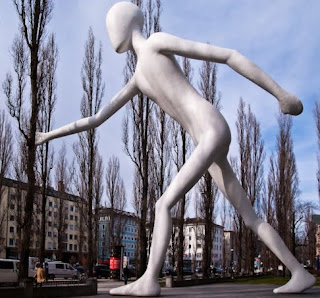 The Wall Street Journal is relaying a report that a unit of German insurer Munich Re hired about 20 prostitutes for a 2007 party in Budapest as a reward for some of its top salesmen. The news was broken in the German newspaper Handelsblatt, but has also been confirmed by company representatives. The party for about 100 insurance agents was held at Budapest's historic Gellert spa.

Prostitutes hired for the event were designated with armbands, and escorted party attendees to beds set up near the spa's thermal baths. They would earn a stamp on their forearm upon their return to keep a running tally of their services.

The company is huffing and puffing about this not being in character, but the reality is otherwise. The company is so used to hiring prostitutes of all descriptions that one finds this even entirely unremarkable. In fact, for a company that has a statue of DSK coming from his bathroom outside one of its offices (pictured above), we should expect this as normal practice.