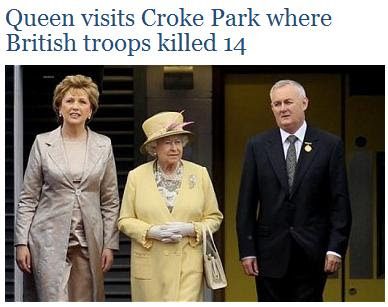 The babies in the Daily Failygraph have a headline about a rich old lady's visit to Croke Park stadium in Dublin "where British troops killed 14", supposedly on 21 November 1920. The link now removed and this one substituted. The reference to "British troops" in the headline is edited out, critical comments have been deleted and the comments disabled. However, the text still contains historical errors, asserting: "British soldiers shot dead 12 spectators and one player",

Journalist Andy Bloxham has got it wrong and, as Kevin Myers for the Irish Independent informs us, before you start quoting history, it is a good idea to learn it. British troops killed no one there. Royal Irish Constabulary (RIC) men did the shooting after the IRA had that morning killed 13 British and Irish personnel, some of them intelligence officers and MI5 agents, for the loss of one of their own. At the stadium, twelve were shot and another two were trampled to death by the crowd and, that evening, three IRA prisoners in Dublin Castle were beaten and killed by their British captors.

Two military courts of inquiry into the massacre were held, and one found that "the fire of the RIC was carried out without orders and exceeded the demands of the situation". Major-General Boyd, officer commanding Dublin District, added that in his opinion, "the firing on the crowd was carried out without orders, was indiscriminate, and unjustifiable, with the exception of any shooting which took place inside the enclosure".

The Daily Fail got it partly right, but the British-hating BBC talks of British "forces".  The Guardian has "British army", while the ITN also perpetrates the calumny and talks of "British soldiers", alongside Aljazeera, The Independent and the Irish Times, which have "British troops" massacring 14 civilians at the football match.

You would expect the squalid television to get it wrong, alongside an Arab propaganda station and some of the Irish press - especially the Irish Times. And no one with any sense expects the BBC, the Independent or the Guardian to get it right. But the Failygraph still pretends it's a newspaper. What a sadly deluded little rag it has become. It should not need its readers to do its work for it.