A voice from the ghetto 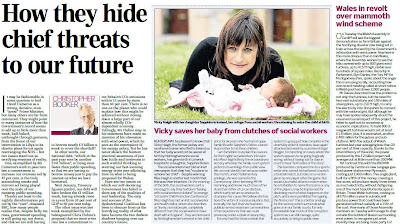 I suspect that Booker may not be flavour of the month with his own management, who is breaking ranks this week in his column by calling into question David Cameron's "leadership qualities" (lack thereof).

The government's record, he says, seems to add up to little more than weak, half-baked, unthought-through gestures, from the fiasco of our intervention in Libya to its chaotic plans for yet again rearranging the NHS, and Cameron's wish to pass into law a commitment to increase our overseas aid by 47 percent.

But two issues stand out as terrifying evasions of reality, Booker avers. One of those is the truly astonishing smoke and mirrors act being played over the scale of our runaway public spending, while the other issue was exemplified last week by the beleaguered Huhne's proposal that we must write into law a commitment to cut Britain's CO2 emissions by more than 50 percent within 15 years.

So important are just these two issues that, even if the government had got everything else right, it would be difficult to argue that our "self-deceiving" government had shown any of the qualities of true leadership. Says Booker, the only real success of the dysfunctional Coalition has been to obscure from us the horrifying reality of what have become the two darkest shadows hanging over our country's future.

Of course, Booker dare not point openly to the other partner in this obscuration, the MSM – and in particular the political correspondents who have been brown-nosing Cameron to quite an extraordinary degree. But it is a little comforting that, even yesterday, we were finding other complaints about the failure of the government to come clean on the extent of the financial situation.

As we noted, however, on top of its brown-nosing, the media's obsession with trivia is also a factor in the distortion of the news agenda. This features in Booker's second piece - about Vicky Haigh, the single mother of whom it was revealed that she had been threatened with prison for revealing that Nottingham Social Services were intending to seize her (then) unborn child.

It was this and issues like it that were the real meat of concern about the current predilection of judges to support (and enforce) excessive secrecy, but it is entirely typical of a venal and lightweight media to go into bat on the side of the judge and then to focus on the truly pathetic issue of a promiscuous footballer and other slebs.

Raedwald explores the broader issues in an intelligent and adult way, and he rehearses aspects I have not seen addressed in the media. Rather than dealing with any point of principle, the newspapers, in particular, seem more concerned that their ability to retail low-grade "sleb" tat is being circumscribed. Certainly, if the media in general was truly concerned with freedom of speech, than it would be crawling all over the family courts, and their behaviour, instead of concentrating on the more venal aspects.

Another issue that is rarely properly dealt-with by the media is the growing opposition to subsidy farms, with Booker devoting his third piece to the outcry in Wales as the encroachment of the windmills on some of the best scenery in the kingdom – and the pylons required for distribution - is beginning to have a very serious impact.

Add the fact that the subsidies paid from electricity bills is racking up our electricity cost to unsustainable levels and this is an issue were the media could rightly be expressing outrage.

But as long as we have a media that so lack judgement that it sees in Cameron a prime minister with the seeds of "greatness", then – other from the occasional voice from the ghetto - we are not going to be able to rely on this source for intelligent comment. And if they could replace Booker with a little girlie columnist, even the ghetto would then be silenced.