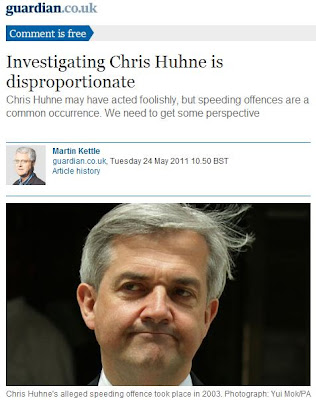 How interesting it is that the Guardian employs one of its associate editors, Martin Kettle, to act as an apologist for Chris Huhne.

Even accepting, for the case of argument, that Huhne committed a speeding offence eight years ago and then persuaded his wife to take the points on his licence, writes the egregious Kettle, is it a serious enough matter to require Essex police to conduct an investigation now?

Then Kettle employs the cheap trick of framing the argument, asserting that, if you take an absolutely fundamentalist position that every infringement must be thoroughly investigated in every case, and every possible offence arising from it turned into a prosecution, then you will say yes.

This then allows him to appear eminently reasonable, contrasted with the "fundamentalist position?". In his "reasonable" view, Huhne should not be pursued. This isn't rape, or robbery or assault or serious fraud.

No, it isn't any of those things. It is perverting the course of justice – an offence deemed so serious that it attracts a first-time prison sentence. And the nature of the alleged perpetrator is also relevant. This was an MEP, then with ambitions to become an MP, and now a Cabinet Minister.

This is no ordinary Joe. He is a lawmaker, from whom a higher standard of behaviour is demanded. He is required to set an example. If our masters can freely flout the law, the theory goes, why should lesser mortals take them seriously?

So yes, this is a serious enough matter to require Essex police to conduct an investigation now. And Tim Worstall reminds us that both Jeffrey Archer and Jonathan Aitken served time for perverting the course of justice. Kettle is seriously out of order here.