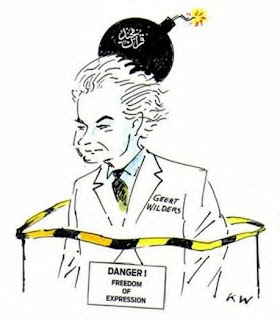 Having written about Geert Wilders and his various travails several times, long before the topic became trendy, we were pleased to hear the news that the ridiculous ban on his entry into the UK, imposed by the then Home Secretary, Jacqui Smith, in February has been overturned.

Actually, Philip Johnston is not entirely accurate in his comment about the Appeal Court. It was the Asylum and Immigration Tribunal that ruled against the ban, arguing that "that there was no evidence a previous visit had caused problems and said it was more important to protect freedom of speech".

The Home Office thinks otherwise, as the BBC reports:

Following the tribunal's decision, a Home Office spokesman said: "We are dis appointed by the court's decision. The government opposes extremism in all its forms.

"The decision to refuse Wilders admission was taken on the basis that his presence could have inflamed tensions between our communities and have led to inter-faith violence. We still maintain this view."

They obviously do not consider freedom of speech important, the right to discuss matters important and equate extremism with an ability to get other people angry. They are also considering whether to spend more of the taxpayers’ money to appeal against the Tribunal's decision.

So far, so good. Freedom of speech has been confirmed and legality upheld. Written judgement will be handed down next week and, in the meantime, Mr Wilders will be giving a press conference in London tomorrow. It is sponsored by Lord Pearson of Rannoch but is not a UKIP event, no matter what anybody might think. I shall be there and shall report on it.

The question is to what extent the decision was based on the notion of EU free movement. In other words, did the Tribunal make the right decision, using EU law to overrule the Home Secretary? If so, we are faced with a dilemma. Not on whether to support the decision – we do that unreservedly; the real problem is how to convey the idea that it should be our government making the rules and not the EU, when our government is so utterly stupid and feeble. And don't tell me we can throw them out. Have you seen what is waiting in the wings?