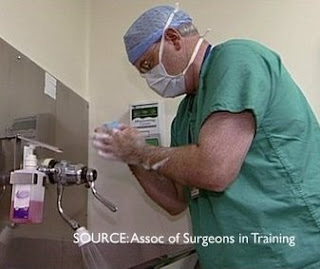 For some time, we have been following the effect of the EU's working time directive on hospital staffing, getting pretty worked up about how the EU is killing patients.

Now, The Sunday Times is running another story, declaring that senior doctors say "NHS patients are dying as a result of new European Union rules that impose a 48-hour week on hospital staff."

This is from the Royal College of Surgeons (again) which has produced a "hard-hitting report" claiming that lives were being lost because patients had to be switched between up to four doctors every 24 hours, instead of being cared for by the same team round the clock.

When junior doctors used to work 80-hour weeks, they stayed on call at all times and sleeping in the hospital. Surgeons said this guaranteed continuity of treatment. However, in August, EU rules were introduced limiting their working week to 48 hours.

Crucially, even on-call time when a doctor is in a private room on the hospital premises is regarded as "working time", which is causing no end of problems. John Black, president of the college, said that, as a result, no doctor was monitoring patients for long enough to detect changes in their condition and vital medical details were being mislaid in a chain of "Chinese whispers".

The surgeons claim that the rapid changes in shifts mean that nobody is taking personal responsibility for patients. One surgeon who responded to the survey said: "No rapport is built with the patient and no responsibility is assumed by the junior for the patient care. An unmitigated disaster."

Interestingly, some of the comments are not entirely sympathetic. One says: "In this country (NZ) doctors have worked 48 hour weeks for at least 20 years. It's generally seen as saving lives; perhaps the NHS needs to take a good long look at its management practices."

Another proposes that doctors "sleep by their patients, never go home and then no one will be dying in hospital." The writer suggests that this is "Just another article on the anti EU bandwagon."

Actually, there is a whiff of that. There is something not quite right with the article – it may be the way it has been written, but one cannot help but feel there is an element of bureaucratic inflexibility, or some such, that is hampering the adjustment to the new working regime.

The broader point from this, though, is that we have had imposed a "one-size-fits-all" directive into which the NHS has been shoehorned. It is clearly creating stresses that have not yet been resolved. Yet, in the past, over-work and long hours by junior doctors was considered a real scandal, with claims that tired doctors were also killing patients.

One would like to think that, had our own parliament devised new rules, then perhaps a more sensitive, better-designed regime might have been devised, specific to the peculiar circumstances of the NHS. This, in an ideal world, would have solved the problem without creating the stresses that are being reported.

On the other hand, as the NHS is a nationalised industry, such administrative rules would have been created in-house by management fiat, without parliamentary intervention. And knowing the bureaucratic inertia for which the NHS is famous, probably nothing would have been done about a problem which has been going on for decades.

It is thus only the intervention of the EU that has actually brought in external rules that force compliance - and it is quite possible to make the case that the reduced hours are saving as many lives as are being lost by the problems encountered.

And therein lies an interesting conundrum. The rules for state enterprises such as the NHS are to a very great extent outside the control of parliament. It takes a supranational entity to create laws which they have to obey, whether they like them or not. That is not a happy situation for your common or garden eurosceptic, who would have the EU responsible for all ills.

The real answer, of course, is to break up state monoliths such as the NHS. As with schools, "free at the point of delivery" does not mean that the state must deliver the service. Any number of enterprises, from charities to non-profit trusts and commercial firms can step up to the plate, putting the state in its proper role of standing back from the fray and acting as the arbiter and enforcer of good practice.

Funnily enough, way back, we experienced this with school meals. Although food hygiene regulations applied to school kitchens, the regulations were enforced by the local authorities ... and the schools were run by the local authorities. Prosecuting the school meals department was a non-starter. Private sector schools, however, were exposed to the full force of the law.

Thus, although the EU can sometimes, superficially, seem to provide an answer, there are invariably different and better ways of resolving a problem. By that measure, the response to specific problems need not mean exercising greater but less control. Less, in such cases, equals more.