One small setback for man ... 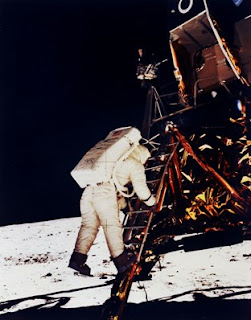 EU finance ministers failed to agree on the funding it will give the developing world to cope with global warming, "a setback for the deal negotiators hope to deliver in Copenhagen."

A call from the chancellor, Alistair Darling, for the EU to commit to €10bn, of which Britain would contribute €1bn, went unheeded. The European Commission has proposed €15bn a year by 2020. The European parliament's environment committee this week put the figure at €30bn, but environmental lobby groups talk of €35bn.

"It's a disappointing outcome," admitted Anders Borg, the Swedish finance minister, who chaired the meeting. "There's obviously been a lack of commitment."

They're throwing figures around like confetti. Who is this Anders Borg to talk "about lack of commitment"? When he starts spending his own personal money, that will be the time to listen.

But then, there's only 48 days to save the planet ... when we have one giant leap ... backwards for mankind, if the greenies have anything to do with it.