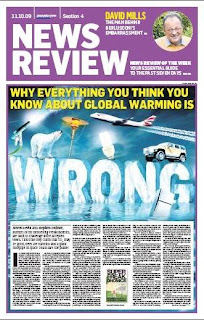 It's interesting how they do catch up ... eventually. The Daily Mail is running a piece headed: "Whatever happened to global warming? How freezing temperatures are starting to shatter climate change theory".

In the freezing foothills of Montana, it tells us, a distinctly bitter blast of revolution hangs in the air. And while the residents of the icy city of Missoula can stave off the -10C chill with thermals and fires, there may be no easy remedy for the wintry snap's repercussions. The temperature has shattered a 36-year record. Further into the heartlands of America, the city of Billings registered -12C on Sunday, breaking the 1959 barrier of -5C.

Closer to home, we are informed, Austria is seeing its earliest snowfall in history with 30 to 40 centimetres already predicted in the mountains. Such dramatic falls in temperatures provide superficial evidence for those who doubt that the world is threatened by climate change. But, the paper continues, most pertinent of all, of course, are the growing volume of statistics ...

Actually, you could have read most of the snow news (and more) here, here, here and here. We've been at it since Saturday. We missed Austria (although the Mail missed Tibet) but there are details here. It is indeed the earliest Autumn snowfall in years. Furthermore, there are predictions of snow down to 400m in the provincial capitals of Innsbruck, Salzburg and St Polten, which would be the first time it has snowed this low before 20 October since records began. This is – as we pointed out elsewhere is not normal.

However, that the Mail is even talking in these terms about "climate change" is significant, and it is happening in other newspapers as well. On Sunday, the Sunday Times review section ran a big feature (not on-line but front page pictured) and the Australian press is having a go. The Financial Post is picking up the vibes as well and gradually, it seems, the media is getting the message – global warming is a crock.

Needless to say, the politicians and that fool Rowan Williams are way behind the curve – and still the evil b******s are trying to tax us to death. But otherwise, the tide is turning ... or the cold draught of reality is blowing in, whichever you prefer. I wonder how long it will actually take the politicians to wake up – but then, they have much more important things to worry about. They really are blowing it, in a very different way.

Meanwhile, today there will be PMQs. The very first question to Gordon Brown will be on the constitutional Lisbon treaty. Staying in wondering mode, what's the betting on whether the media pick it up and report it?