We need a revolution 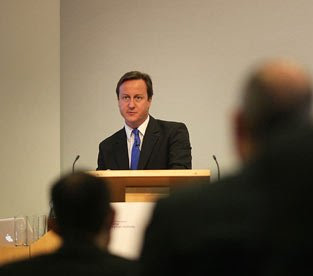 From the great sage David Cameron, via Witterings from Witney, who has a few terse words to say on the subject.

Addressing the Sustainable Consumption Institute conference, Dave outlined "five approaches to create a Green Consumer Revolution". But first, he wanted to get a few things straight. "There is now widespread agreement about the nature and scale of the threat posed by climate change," he said, adding:

Let me give you just one fact. If the Himalayan glaciers melt, three-quarters of a billion people will be without sufficient water. We cannot pretend that this would not have serious consequences for all of us – in terms of global conflict, the mass movements of people and our national security. Of course, there will always be some who deny the science and the scope of the threat posed.

They say ninety percent certainty is not good enough. But that is not a justification for inaction. I say to them, would you ask your children to live in a house which ninety percent of the experts told you was going to burn down?

Mr Cameron's message to all of us is "one of optimism tinged with urgency ... Yes, our resources are low. Yes, our planet is in peril. And yes, the alternative to action doesn't bear thinking about."

On one thing, though, we can agree. Methinks we do indeed need a revolution – but it ain't the sort young Dave is thinking about.