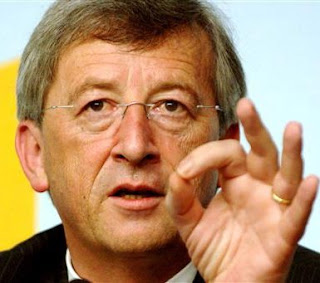 Tony Blair's chances of becoming the EU's first president were fading tonight, says The Times, as opposition to the move grew across Europe and France and Germany failed to throw their weight behind him.

Much as we would like it to happen, as it would give a "face" to our vassal status under the constitutional Lisbon treaty, the thought of that leering visage representing "Europe" is proving too much for the "colleagues".

Thus, we are told, the case for Emperor Blair came under attack from European leaders on both right and left at the European Council in Brussels, despite an appeal from Gordon Brown to the European Socialists to "get real" about the merits of Mr Blair.

There is no word on an alternative, but the current prime ministers Jan Peter Balkenende of the Netherlands and Jean-Claude Juncker of Luxembourg, as well as Wolfgang Schussel, the former Chancellor of Austria, are being touted as possible candidate.

A grey little apparatchik is much more in keeping with the ideas of the "colleagues" – someone who is at one "biddable", completely communautaire and not so dominant as to clash with Merkel or Sarkozy.

Jean-Claude Juncker, in fact, would fit the bill admirably. He would be on the line to Berlin for permission to wipe his backside after going to the toilet, while France would control the toilet-paper rations, making for a "double lock" on his freedom of action.

For all its 27 members, France and Germany – the "engine" of integration – still call the shots. Without them, Blair is dead meat. Hail Emperor Juncker!