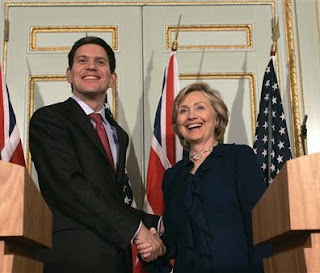 The Times leader is taking Obama to task for "dithering" over Afghanistan, contrasting his lack of action unfavourably with sentiments expressed by David Miliband, recently highlighted in a New York Times op-ed.

While Obama havers, torn between the Biden-inspired "counter-terrorism" approach and McChrystal's brave new world of "counter-insurgency", there is no such irresolution from the British foreign secretary. When asked if the mission needed substantially more troops, Miliband said, "What I think that you can see from the prime minister's strategy is that we believe in serious counterinsurgency. Counterinsurgency is a counterterrorist strategy."

Fortified by these words, The Times is suggesting that the US president must show at least as much resolve as his British allies, although it cannot mean this literally. While the British commitment is to 500 extra troops, McChrystal is demanding another 40,000 – a slightly different proposition.

Miliband's "resolve", in fact, may be more a question of fools rushing in. Even more to the point, in the context of a solid phalanx of media pressure demanding more "boots on the ground", backed by ranks of politicised ex-generals, deploying another battlegroup was the easy option – a relatively cheap way of stilling the incessant clatter, taking a politically embarrassing issue off the front pages.

On the other hand, while the strategic focus has shifted to Pakistan, it is secretary Hillary Clinton who is in Islamabad, pledging an extra $243 million in aid, and seeking to stiffen the Pakistani government's resolve in the battle against the Taleban.

Yet, while a US secretary of state is trying to broker deals in a former British dominion, where the Raj once held sway, Miliband's latest contribution is to suggest that we walk away from formulating our own foreign policy, and throw in our lot with the European Union, his idea being "to take a lead in developing a strong European foreign policy".

Thus, while The New York Times applauds Miliband for being "candid", wishing for the same from Obama, the difference is between a powerless emissary, who can comment freely on issues for which he bears no responsibility, and an executive of a nation that exerts real power, and has to step up to the plate with real commitments to back any decisions made. Talk, as they say, is cheap – and you don't get much cheaper than Miliband's contribution.

Perversely, just as the British government had thought the issue "parked", we are seeing the glimmerings of a change in the political wind, this side of the pond. Veteran commentator on Pakistani and Afghan affairs, Christian Lamb, writes in The Spectator this week, declaring "more troops will just mean more targets". Then, in The Financial Times, even the great sage Max Hastings, is going "wobbly", questioning whether it is "sensible for the west to continue pushing military chips on to the table if each spin of the roulette wheel obstinately delivers a zero."

Gradually, it seems, wiser heads are drawing back from the strategic wisdom enunciated by the likes of The Sun, and beginning to think about the broader issues – perhaps starting a debate which has been notably absent in the UK.

Nowhere is this more welcome than in Pakistan itself, where the Daily Times is arguing for a "regional approach to Afghanistan", invoking a grouping almost unknown in the West, the Shanghai Cooperation Organisation (SCO). This, says the paper, is "steadily becoming an important factor of emerging architecture of security, economy, culture, people-to-people contacts and cooperation in Asia".

A key player here is China, with which Pakistan has good relations, and which is exerting increasing influence in Afghanistan. But the paper also highlights the tension between Pakistan and India, pointing out that resolution of differences between these nations is an important part of the overall solution. The SCO, it believes, could be an important player in bringing the parties together.

Clearly, the EU is waking up to the potential of the SCO – or is being warned that it must take an interest - with a commentator last year noting that it offered "opportunities for positive cooperation". Previously, the Centre for European Reform made its pitch, noting multiple (and largely unsuccessful) EU initiatives in the area.

And therein lies the hidden cost of our membership of the European Union, and this government's determination to cede our policy-making responsibilities to Brussels. While we are a major player in Afghanistan – more so than any other European nation – news of contacts between David Miliband and this grouping on behalf of HMG is hard to find. On the wider diplomatic front, already we seem no longer to have a voice.

Thus, the initiative goes to, and stays with, the United States, our vassal status in the European Union robbing us of our voice and our initiative, leaving Mr Miliband to mouth inane platitudes to the New York Times, which the paper mistakes for "resolve".

Miliband's only "resolve" however, is to ensure that the once mighty Great Britain ends up with less power and influence than the independent state of Afghanistan, where we are singularly failing to make a mark.